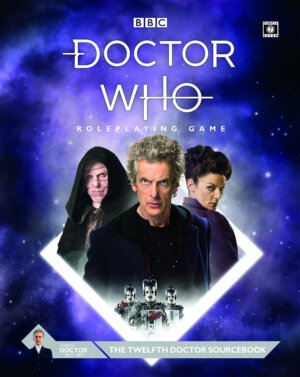 Cubicle 7 Entertainment is preparing to release the hardcover Twelfth Doctor Sourcebook for the Doctor Who Roleplaying Game. The book will feature the Peter Capaldi incarnation of The Doctor as well as his companions, adventures, allies, and adversaries. These sourcebooks are also great for non-gamers but who happen to be big Doctor Who fans. The 160 page hardcover will carry an MSRP of $39.99 when it arrives February 26th, while the PDF is available now at DriveThruRPG for $19.99.

This Sourcebook explores the Twelfth Doctor’s adventures on Earth and beyond. With detailed information on all the allies, enemies, aliens and gadgets they encounter, as well as examining each adventure, the book contains a wealth of material for the Doctor Who Roleplaying Game, and is also a fact-packed resource for fans of the show!

Gifted a new series of regenerations after rescuing the home-world they once thought they doomed, the Doctor barreled back into action. With a new lease of life and not a second to waste, the Doctor returned ready to save the universe — whether it wanted it or not. Duel with Robin Hood, journey to the center of a Dalek, outfox deadly two-dimensional killers, meet the Master’s capricious new incarnation, and tell all of them to shut up!

Just one question… Do you happen to know how to fly this thing?

Included in the Twelfth Doctor Sourcebook are: