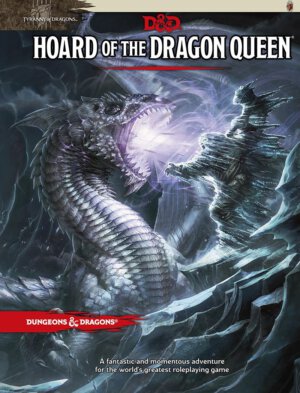 One of the most highly anticipated releases at Gen Con is the first installment in the Tyranny of Dragons storyline for the latest edition of Dungeons & Dragons. Wizards of the Coast will have Hoard of the Dragon Queen available for attendees and I’ll guess the adventure will be one of the bigger sellers at the show. Hoard of the Dragon Queen is suitable for low level characters and should see them progress through level seven.

Stay tuned for plenty of D&D coverage, as well as more about Tyranny of Dragons, later this week!

Fight the war against draconic oppression in this adventure for the world’s greatest roleplaying game.

In an audacious bid for power, the Cult of the Dragon, along with its dragon allies and the Red Wizards of Thay, seek to bring Tiamat from her prison in the Nine Hells to Faerun. To this end, they are sweeping from town to town, laying waste to all those who oppose them and gathering a hoard of riches for their dread queen. The threat of annihilation has become so dire that groups as disparate as the Harpers and Zhentarim are banding together in the fight against the cult. Never before has the need for heroes been so desperate.