Obtaining a license to produce a miniatures game based on The Walking Dead property is as near as one could get to printing your own money and Mantic Games is proving that point with their current Kickstarter. I mentioned the upcoming The Walking Dead: All Out War previously and now the project is not only live but has surpassed the 550% funding mark (and unlocked loads of stretch goals) with over two weeks to go. Mantic is known for producing some interesting systems, and minis, so this is surely one to check out with a minimum pledge level of $125.

The Walking Dead: All Out War is the survival miniatures game from Mantic Games, based on the characters from the pages of the bestselling The Walking Dead comic series from Skybound Entertainment. Your group will be pitted against other groups – in a bitter fight for supplies…but beware, the Walkers react to your every move. In this game everyone and everything is trying to kill you.

The Walking Dead: All Out War Miniatures Game is a tactical head-to-head game set in the walker-strewn Georgia countryside. 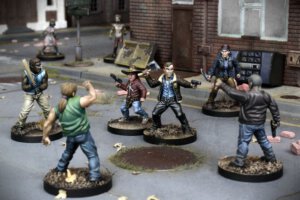 In The Walking Dead: All Out War, each player builds their own group of survivors made up of popular characters from The Walking Dead storyline, such as Rick, Shane, Michonne and many more.

The game is set around Atlanta and the surrounding suburbs, and contains a gaming mat and a selection of barricades, abandoned cars and supplies to give it that authentic The Walking Dead atmosphere.

Your survivors move across the board using the measuring stick included with the game, and you’ll use the terrain to block Walker routes and sneak up on opposing survivors, or raid enemy camps for supplies.

During the game, you will fight a bitter battle for resources against a rival group of survivors – but be careful not to make too much noise, as you’ll draw the attention of the Walkers.

The Walkers are controlled by an AI system developed specifically for this game, attacking anyone who comes within reach – and because they are AI you can play the game solo.

In the base games there are also rules for running simple campaigns and basic guidelines for designing your own characters.

But beware – there are enemies all around you, and danger lurks around every corner. 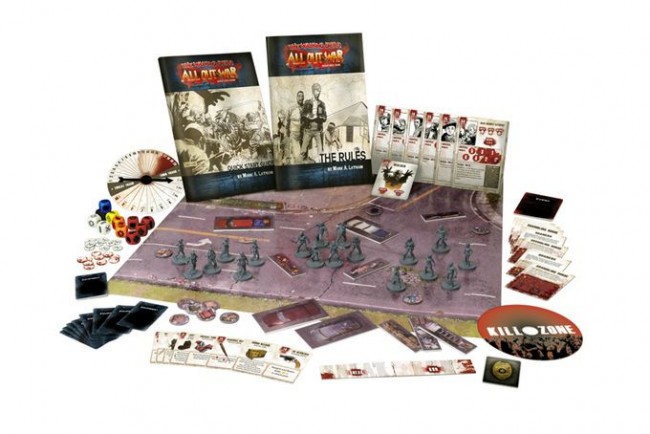