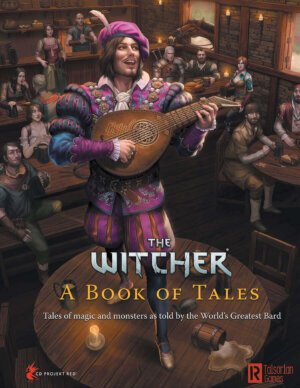 R. Talsorian Games has released a new adventure supplement for The Witcher roleplaying game. A Book of Tales contains six adventures spread across the land plus plenty of new options for players and GMs alike. The 178 page PDF is available at DriveThruRPG for $15.00.

Tales of magic and monsters as told by The World’s Greatest Bard!

Adventure across the world of The Witcher, uncovering its secrets, slaying its monsters, and bringing its stories to life, as entirely and truthfully recollected by the famed bard Dandelion.

In this book, you’ll travel from the could mountains of Kovir to the wine soaked region of Toussaint in Nilfgaard, meeting interesting characters along the way, with intrigue around every corner.

A Book of Tales is a supplement for The Witcher Pen and Paper RPG that gives you six adventures that span the Continent, complete with new monsters, player content, and maps. All compiled into a larger campaign.