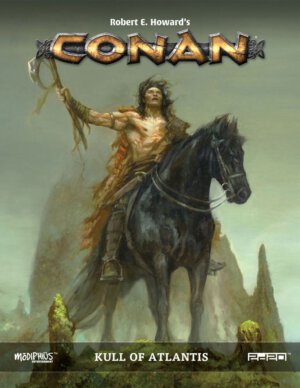 Modiphius has revealed plenty of extras for Robert E. Howard’s Conan: Adventures In An Age Undreamed Of currently funded on Kickstarter. First is The World of Kull – King of Atlantis sourcebook which will take gamers into the setting of one of Howard’s other famed sword and sorcery heroes, King Kull. Then there’s the Age of Conan sourcebook which ports areas and character classes from the popular MMORPG into the table top game system. Plus there’s also fifty page quickstart which you can grab absolutely free right here by way of DriveThruRPG.

There’s still two weeks to go in the Kickstarter and you can get your hands on the core rules and a slew of unlocked goals, in PDF format, for a pledge of $58.

The World of Kull – King of Atlantis

The World of Kull – King of Atlantis, is a major cross-over book for Robert E. Howard’s Conan Roleplaying Game and will feature the art of world-renowned fantasy artist and Kull specialist Justin Sweet, who won the Jack Gaughan award, has worked for Black Isle Studios and Wizards of the Coast, as well as producing concept art for the movies Prince Caspian, Snow White and the Huntsman and The Avengers

Contained within its pages are descriptions of the Thurian continent as it was a hundred thousand years ago, long before Conan’s own Hyborian Age. With this volume as their companion, heroes can visit Lemuria, Grondar, Atlantis, the Pictish Isles, Commoria, and the mightiest kingdom of them all… Valusia, City of Wonders. Visit the House of the Thousand Mirrors, seek wisdom at the depths of Forbidden Lake, battle the Skull of Silence, sail with Lemurian pirates to the World’s Edge, debate philosophy with Delcardes’ cat, or strive to claim the Topaz Throne! 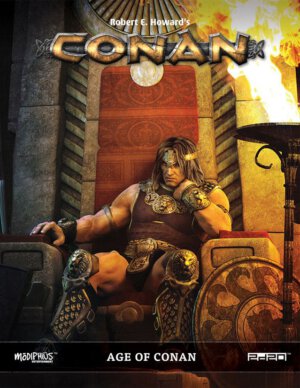 The Age of Conan sourcebook will take many of the most popular locations,
characters, monsters and magic from Funcom’s celebrated Age of Conan MMORPG videogame, allowing players to experience them in a table top setting for the very first time.

The sourcebook for the Conan roleplaying game will be written with assistance from Funcom’s own Age of Conan team and further cements a partnership which sees Kickstarter backers receive additional benefits in the popular MMORPG.

The Age of Conan sourcebook offers expanded character generation rules with brand new backgrounds based on classes in Age of Conan, allowing players additional options such as even more dangerous magical powers.