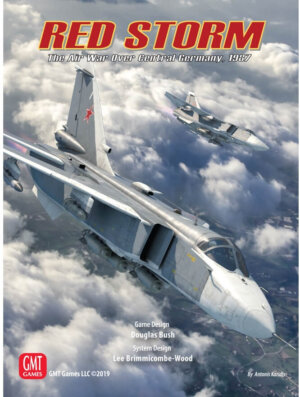 The latest release from GMT Games is available and it tackles the air war during a hypothetical late 1980’s WWIII. Red Storm tasks each player with leading their air resources, as one player controls the less technically advanced Warsaw Pact while the other helms the outnumbered NATO forces. The game is for two players, age 14+ (my estimate), has a higher than average complexity with mid level solitaire suitability, and carries an MSRP of $70.00.

May 1987: More than 2,000 aircraft in the Warsaw Pact air forces reach a peak of readiness. They plan to overwhelm the NATO air forces and provide cover for the Soviet armies in East Germany to roll across West Germany to the Rhine in less than a month. For NATO commanders, the long-feared “Red Storm” in the skies above Germany is finally here…

The second sequel to the Charles S. Roberts Award-winning game Downtown, Red Storm is a standalone game that utilizes the Downtown game system to depict a hypothetical air war in May/June 1987 over the central portion of the NATO-Warsaw Pact front in central Germany. Like Downtown and Elusive Victory before it, Red Storm is an “operational” level air warfare game where players manage large strike packages and numerous combat air patrols in an effort to strike enemy targets, protect their own ground troops, and secure control of the air above the land battle raging below. Both sides field highly advanced all-weather aircraft, long-range air-to-air missiles, precision bombs, sophisticated electronic warfare assets, and networks of surface-to-air missiles and radar-guided AAA.

As the NATO player, you fight outnumbered in the air, but with a qualitative edge in technology and training. NATO faces the daunting task of claiming air superiority in the face of the initial onslaught from the Warsaw Pack air forces while also delivering bombs onto Soviet and East German ground targets already on the frontline and those approaching in the rear echelons. As the Warsaw Pact player, you must push your numerous but less flexible forces to the absolute limit in an effort to overwhelm NATO forces in the air and destroy them on the ground, all while supporting your advancing ground forces. Both players also must manage air defense networks consisting of overlapping layers of SAMs and AAA.