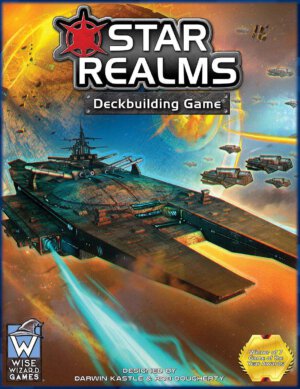 Wise Wizards Games is releasing a Star Realms Box Set this month. The set will include enough cards for four players as well as options for solitaire and coop game play. The box set is for one to four players, ages 12+, plays in around 20 minutes, and will carry an MSRP of $39.99.

Wise Wizard Games LLC, have officially launched the new Star Realms Box Set. This complete 1-4 player game is perfect for new players and experienced players will love it, too. Star Realms is an explosively-popular Strategy Game that combines the fun of a deckbuilding game with the interactivity of trading card game-style combat. Star Realms has won 7 Game of the Year awards, and the Star Realms digital app has been downloaded over 1M times.

“We are excited to offer this larger Box Set to everyone that loves Star Realms in time for the holidays! This is a beautiful upgrade for existing players and a perfect set for new players.” said Rob Dougherty, CEO of Wise Wizard Games.

● Top-selling Star Realms Deckbuilding Game, winner of 7 Game of the Year awards and voted as a Top 100 Board Game on Boardgamegeek.com.
● Includes the Gambit set with two solo/cooperative challenge cards
● A perfect intro set for New Players for Solo, PVP and Cooperative
● First ever Star Realms Game Board for easy set-up
● Box Insert with sections for each Starter Deck, Explorers, and the Market Deck
● Large box holds sleeved or unsleeved cards with room for expansions
● Big beautiful full color rulebook

First Look at Call of Cthulhu: Petersen’s Abominations on The Gaming Gang Dispatch #679