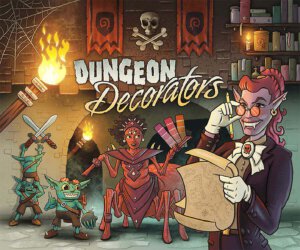 Get ready to compete to become one of the best Dungeon Decorators in the land. In this new Jeff LaFlam design, from SlugFest Games, players will look to spiffy up the Evil Big Bad’s underground lair. The game is for two to four players, ages 10+, plays in 40 to 80 minutes, and will carry an MSRP of $44.95 when it arrives this summer.

Decorate the dungeon. Impress the client. Close the deal!

From time beyond memory, a great evil overlord has plagued the land, his ruthless cruelty matched only by his ruthlessly poor decorating taste. That evil overlord has died, and numerous pretenders are vying to take over his throne. And everyone knows that the first step on the journey to becoming a legendary evil boss is to set up a nefarious lair.

That’s where you come in.

You are a dungeon decorator who specializes in setting up cozy underground spaces with just the right “lair-y” feel for your clients. You will compete against your opponents to build the best dungeon with all the right accoutrements, so that your villainous clients can move in, feel at home, and get right down to evilling.

Dungeon Decorators is a competitive “light euro” tile-drafting strategy game for 2 to 4 players. Select tiles that give you the right combination of chilling chambers, harrowing hallways and dire decorations, then play goal cards to score points. The player who scores the most points achieves victory by impressing the client and setting them on their path to becoming the next legendary evil!