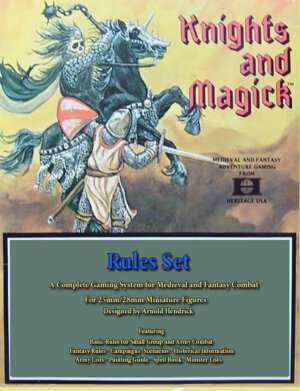 Later this year we’ll be rolling out our crowd funding project for a complete modernization and revision of Knights and Magick. Yet we know there’s still a place in gamers’ hearts for the original rules and we’re soon either going to A) place the rules on the Wargame Vault for PDF download/print on demand – at a higher price than the $12.95 we have been charging, or B) no longer offer the rules for sale and provide the PDF as a crowdfunding bonus at project launch. Regardless of our decision, from now through midnight April 3rd we’ll be discounting the PDF of Knights and Magick over 20% if you order through TGG. This means you can right now score the game for $9.95.

About Knights and Magick:

Volume I: Game Rules and Systems – Forty five pages of basic and advanced rules to get you started including Jousts, Tournaments, Fortresses, and Sieges.

Volume II: Recruiting and Preparing Armies – Forty five pages devoted to not only painting and basing your minis but also an extensive section of heraldry as well as fantasy and historical army lists. Want to put an horde of undead and demons up against an historic army from the feudal period of Polish history? Yep! You can do that!

Volume III: Adventures, Scenarios, and Campaigns –I always felt one of the strongest aspects of Knights and Magic is the campaign system; as in it’s one which is actually playable! Here you’ll find forty one pages of adventures (both small and large), campaign rules including a sample well worth playing, and designer notes.

Volume IV: Monster Index – It can’t be a fantasy game without monsters! Twenty eight pages of beasties to bring to the gaming table including many tried and true creatures of the genre. Personally, we’ve always thought this was a bit on the skimpy side but that will be remedied by upcoming supplements.

Volume V: Magick Index – Another area which we thought was a bit lacking with K&M, back in the day, but will be addressed in supplements. Still, there’s good stuff to be found in the fourteen pages of spells both for battles and for use in campaigns.

Tags
Knights and Magick Save Money on Games