Kobold Press is releasing a trio of new Midgard books focused on the Southlands region. These hit stores later this week. 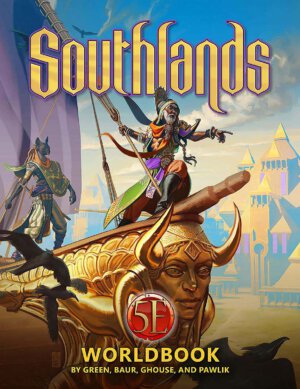 A Vast Realm of Living Temples and Carnelian Tombs!

In the Southlands, the world is alive with elemental power and wondrous magic, ancient god-kings walk among the living, and empires at their height echo the mystery and majesty of the past.

This campaign setting for the 5th Edition of the world’s first RPG is ripe with possibilities for adventure in ancient tombs, enormous jungles, and searing deserts, where swift-flying sand ships dart between distant cities. The sprawling Southlands include the legacy of jinn, the domains of gnolls, the ruins of minotaurs, the gifts of god-kings, and many more rich stories perfect for high adventure campaigns. This 322-page volume includes: 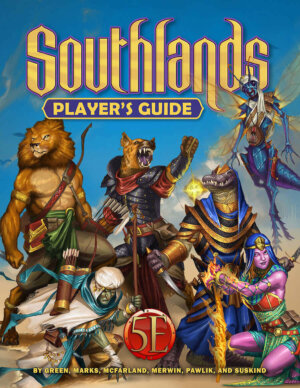 Bold Heroes From the Lands of Pitiless Sun!

Over the crest of the dune they came, more than two dozen gnolls running fast; our sandship was ready for them—until their aeromancer turned the wind itself against us!

This 80-page book provides a treasure trove of character options, including dozen playable races and variants for the 5th edition of the world’s first RPG including: catfolk, gnolls, jinnborn, lizardfolk, minotaurs, trollkin, and many more.

These new options include all-new backgrounds as well, such as the Desert Runner, the Siwali Embalmer, and the Servant of the Jinn. Uncover new Southlands subclasses that fit your character, such as:

Plus new spells, hieroglyphs and lotus blossoms, weapons, armor, and more! The Southlands Player’s Guide adds layers of enchantment to any game! As the official companion volume to the Southlands Worldbook for 5E, this book is the definitive source for players who want to bring their Southlands characters to life! 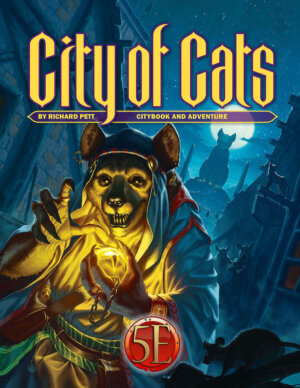 City of Cats for 5th Edition

Who Do You Trust in the City of Cats?

Welcome to the City of Cats, where some very ambitious people have their paws and claws out, where thieves prowl, and where the goddess Bastet herself walks the streets! This city gazetteer and adventure collection is a perfect introduction to the Southlands campaign setting. It also fits neatly into any desert setting where cats are sacred and rats are cautious and sly. City of Cats is FULLY COMPATIBLE with the 5th Edition of the world’s first roleplaying game and includes:

Sniff what’s in the air and prepare for adventure—in the City of Cats!