Cubicle 7 Entertainment has revealed a trio of Warhammer Age of Sigmar Soulbound RPG releases, in partnership with Games Workshop, slated for the first half of 2020. At this point we only have approximate dates when you can expect PDFs to be available for download. 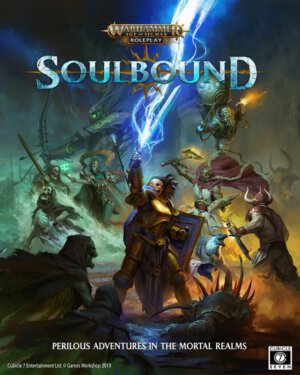 As Sigmar’s Storm broke upon the hordes of Chaos, a flicker of hope was rekindled in the people of the Mortal Realms. The seeds of civilisation were planted and grew into new bastions of Order, and for a moment it almost seemed the endless tide of darkness could be held back. But then came the Necroquake, as the undead legions of Nagash rose up to shatter the cities of Sigmar. Hope dwindles and once more darkness threatens to engulf the Mortal Realms…

Explore the Mortal Realms in the first ever tabletop roleplaying game set in the world of Warhammer Age of Sigmar.

You are Soulbound: heroes chosen by the gods themselves to stand against the horrors that plague the Mortal Realms and tasked with preventing a new age of Chaos and Death. Forge your group from some of the most powerful heroes in the realms and face down roving bands of cannibals, legions of undead, and hordes of daemons in a desperate struggle for survival.

Warhammer Age of Sigmar: Soulbound contains everything you need to roleplay perilous adventures in the epic-fantasy setting of the Mortal Realms. 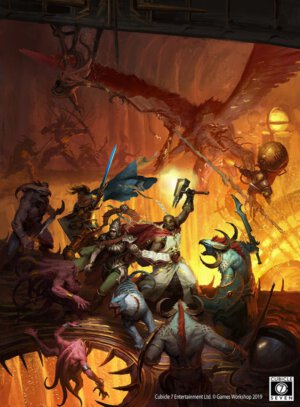 Begin your adventures in the Mortal Realms with the Warhammer Age of Sigmar: Soulbound Starter Set! Journey to the newly reclaimed city of Brightspear in Aqshy, and ally with the Celestial Warbringers of the Stormcast Eternals to stop the forces of Chaos from wiping out the city entirely.

The introductory adventure takes you beneath Brightspear and teaches the game rules as you uncover the secrets of the ancient citadel below.

The Brightspear City Guide details the city of Brightspear and its surrounding areas, and includes dozens of locations, NPCs, rumours, and adventure seeds for players and Gamemasters to expand their Soulbound games. 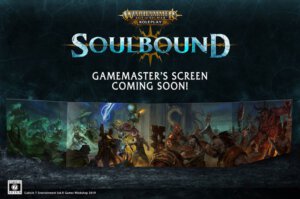 The Gamemaster’s Screen: A four-panel landscape screen with stunning artwork depicting a group of Soulbound facing down an onslaught of Khorne Bloodbound and the Legions of Nagash. The interior screen contains at-a-glance reference for the most used rules information, as well as NPC names and rumours for GMs to create adventures on the fly.

Cities of Flame: A 32 page booklet of adventures set in some of the major cities in Aqshy: Anvilgard, Brightspear, Hallowheart, Hammerhal, and Tempest’s Eye. Includes a short introduction to each city as well as five one-page adventures per city, for a total of 25 adventures!