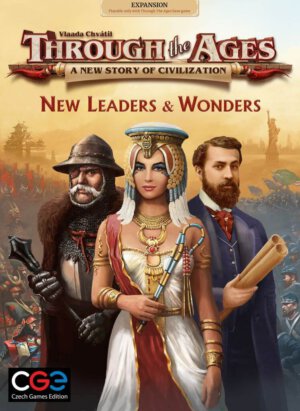 Fans of the Czech Games Edition classic Through the Ages should be thrilled a new expansion is on the horizon. New Leaders and Wonders will include just that as luminaries such as Cleopatra and Charles Darwin and wonders such as the Silk Road and Harvard are added to the game. The expansion is for two to four players, ages 14+, plays in about two hours, and will carry an MSRP of $24.95 when it arrives October 24th.

This is your chance to make history! Throughout time there have been courageous women and imaginative men who changed history, and whose legacy we carry with us to this day. Some of those men and women, along with some of their most wondrous creations, are now joining the new and long awaited Through the Ages expansion.

The New Leaders & Wonders expansion brings exciting new content to the base game, adding leaders, wonders, and military cards so you can change the flow of history and build even greater civilizations!

THROUGH THE AGES: A NEW STORY OF CIVILIZATION

Through the Ages is a complex civilization building game ranked as the third best board game ever according to the Board Game Geek website.

You begin with a small tribe. As you expand your farms and mines, you lay the groundwork for technological advancements, better governments, and grand wonders. Your military might supports your political skill as you guide your civilization to greatness.