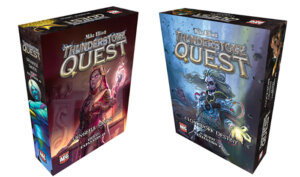 The two new expansions included in Thunderstone Quest: New Horizons are burning up Kickstarter for AEG. A double dose of adventure is in the works as quests eight and nine, plus a special promo, will be added to the hit fantasy deckbuilder’s lineup. Currently the crowdfunding project is over 550% funded and the new expansion will add nearly 500 cards to the game. You can reserve a copy of Thunderstone Quest: New Horizons for a $65 pledge through June 28th with an expected delivery of June 2020.

After the climactic battle in Quest 4: At the Foundations of the World, the Champions are dispersed by the forces of wild magic. One awakens in a far realm of endless sands. Another discovers himself in a strange new city where he may learn the fate of his people.
The world of Thunderstone Quest is even larger than we could ever imagine. It’s time to explore these New Horizons. Back the campaign TODAY to begin or continue your Thunderstone Quest adventure!

This campaign also includes a special promo pack for Barricades Mode: Ezuzrius’ Lair (estimated MSRP $9.99) included in the New Horizons Reward (and all Rewards that contain the New Horizons reward)! Ezuzrius’ Lair is a Kickstarter Early Access release, meaning that Kickstarter backers will get this promotional pack before it is available for sale.