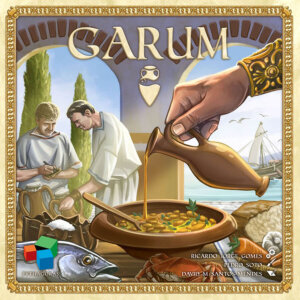 Pythagoras Games has an ancient roman themed tile laying game arriving this month. In Garum, designed by Ricardo Jorge Gomes, players represent masters of fish sauce preparation as each aims to score the most tiles with their particular color. The game is for two to four players, ages 8+, plays in around 30 to 45 minutes, and will carry an MSRP of $45.00 when it arrives in stores this month.

Garum was a fermented fish sauce used as a condiment in the old ages; its manufacture and export was an element of prosperity and perhaps an impetus for the Roman penetration of Lusitanian and Hispanian coastal regions.

Garum from today’s Portugal and Spain was highly prized in Rome and has now inspired a versatile strategy boardgame for the whole family, ages 8 and up, that plays 2 to 4 players. Garum is a tile-laying game, which plays in about 30 minutes, it is language independent and features endless replayability, due to its board system, that ensures no two games are alike.

In Garum, each player represents a master in the preparation of a specific type of fish sauce and receives a set of 16 Cetarian Tiles; each one has 4 spaces filled by 4 colors in different proportions, though the color that the player is defending is the predominant one.

The goal of the game is to play Cetarian Tiles strategically, in order to get a huge number of his own colour symbols in selected rows or columns – the greater the influence, the higher the reward! While placing the tiles, players may apply to score, collect some bonuses and also block their opponent’s intents. Whoever scores most points is the winner. 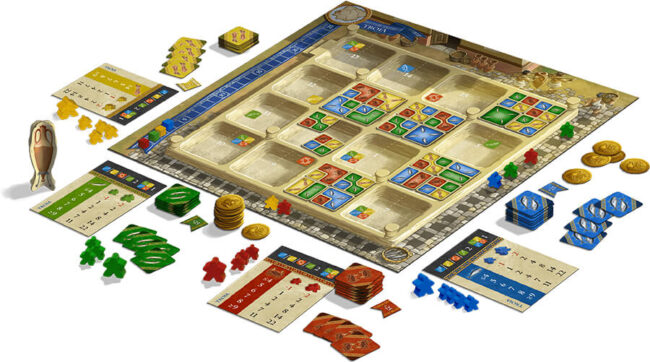