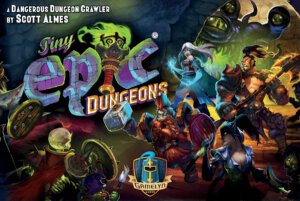 The latest in the Tiny Epic Game line is coming this Spring from Gamelyn Games. In Tiny Epic Dungeons, designed by Scott Almes, players will lead their heroes on dungeon delves to defeat the evil boss and it’s minions. The game is for for one to four players, ages 14+, plays in about an hour, and late pledges are still open for the the deluxe Kickstarter version for $30.00 or get the game and Stories expansion as well for $40.00.

Tiny Epic Dungeons is a fully co-operative dungeon crawler for 1 to 4 players set in the fantasy world of Aughmoore.

In Tiny Epic Dungeons, players control a band of Heroes exploring a treacherous dungeon in search of the fearsome Dungeon Boss. Heroes make their way through the dungeon one room at a time. Around every corner goblins and ferocious minions seek to block the Heroes’ path. Where there isn’t an enemy, traps are set, ready to spring on even the most prepared Hero.
Tiny Epic Dungeons features a modular dungeon that is unique with each play.

The game is played over two acts: The Dungeon, and the Dungeon Boss. In both acts, the players are constantly struggling against the waning firelight of their torch which decreases each turn. When the torch goes out, the Heroes are forever lost in the darkness.

After clearing the dungeon of all its’ minions and finding the entrance to the lair, players must engage in an epic battle against the Boss. Each boss has unique abilities and a lair with a unique environment that gives various advantages and disadvantages depending on the skill used and where the Hero attacks from.

These Epic Monsters cannot be slain by mere swords, axes, arrows, and the occasional spell. Ritual Rooms around the dungeon must be used to lower their magical bond to the dungeon.

The Dungeon boss must be lured to these rooms to lower their defenses and allow the Heroes to strike the final blow!

Victory in Tiny Epic Dungeons is achieved by defeating the Dungeon Boss! In order to do that, the Heroes will need to collect legendary loot, and supreme spells. Heroes of old crafted loot to honor the ways of their clans. Bear, Lion, Phoenix, and Panther. Heroes can discover pieces from these ancient sets that grow more powerful the more you collect.

Will you be the greatest warrior the Bear clan has ever seen? Or will you make the Panther clan proud by stalking your prey and striking with surprising force, unseen before the moment of impact?

The story is yours to tell in Tiny Epic Dungeons! 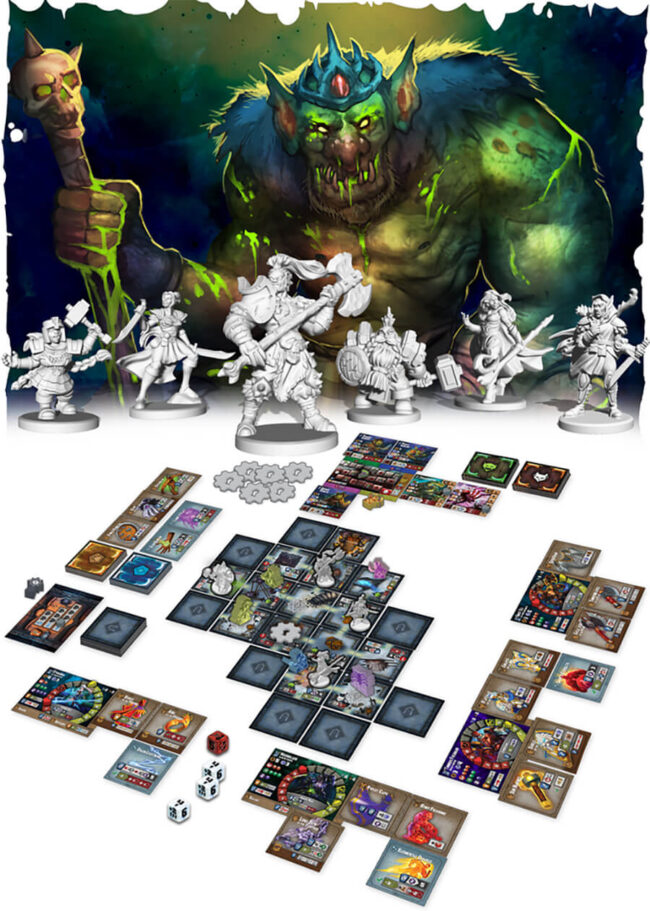