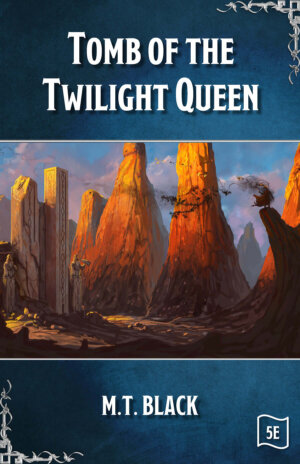 The popular 5E designer M.T. Black has a new adventure which has arrived. You can score the 45 page Tomb of the Twilight Queen PDF at DriveThruRPG for $2.95.

Devious traps and fabulous treasures abound in this adventure for the world’s greatest roleplaying game!

Centuries ago, the Twilight Queen reigned over the most powerful empire in the world. But her realm now lies in ruins, her people are scattered, and her remains are buried in a grand tomb full of deadly traps and marvelous secrets. A renowned scholar has hired you to enter the tomb in search of a fabled artifact, but you will need all of your courage and ingenuity to survive…

Tomb of the Twilight Queen is a 4- to 8-hour adventure for 1st- through 4th-level characters. It has been thoroughly playtested, requires minimal preparation to run, and can be easily transported to any Fifth Edition campaign world!