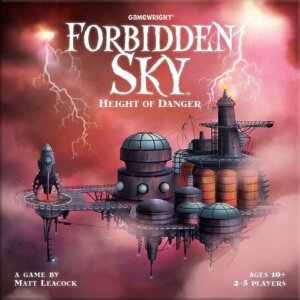 If you’re a fan of Matt Leacock’s Forbidden series of games, from Gamewright, then you should be interested in the latest title set to arrive this Fall. In Forbidden Sky, two to five players will look to not only survive co-op airborne challenges but even complete a real electrical circuit in which to launch a rocket ship to safety. The circuit is real while, obviously enough, the rocket is not. The game is for two to five players, ages 10+, plays in 60 minutes, and will carry an MSRP of $40.00 when it arrives later this year.

Soar to dizzying heights in this electrifying cooperative adventure! Work as a team to explore a mysterious platform that floats at the center of a savage storm. Connect a circuit of cables to launch a secret rocket—all before you are struck by lightning or blown off to the depths below. It’s a high-wire act that will test your team’s capacity for courage and cooperation. One false step, and you all could be grounded …permanently!

The saga continues! What started off as a simple island adventure has evolved into an ever-developing storyline. From ocean (Forbidden Island), to desert (Forbidden Desert), and now to the sky, this latest installment takes you to new heights with several novel challenges, including collectively planning a terrain using only limited information and constructing a real electrical circuit. Forbidden Sky also breaks new ground for Gamewright, as it’s their first game to include an electronic component. Inventor Matt Leacock created such a compelling mechanism with building a circuit that they decided to break their long-held rule of not publishing games with batteries. Hopefully, you’ll agree that the payoff is electrifying! 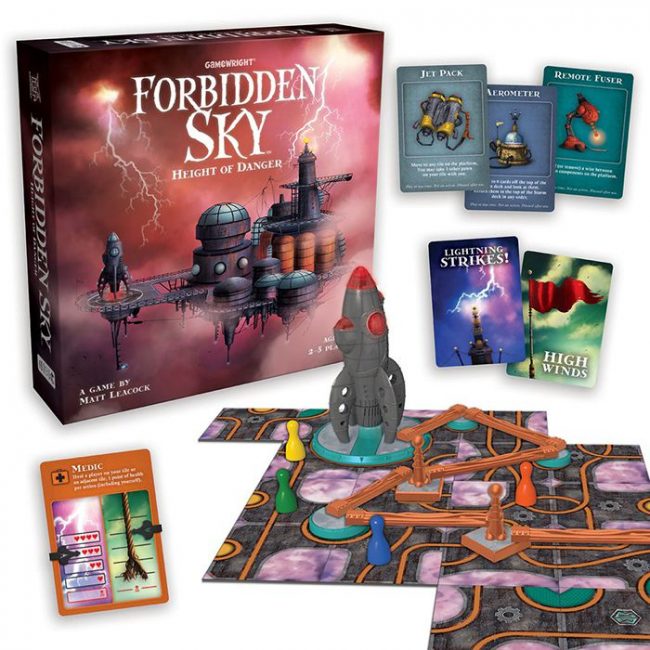