A double dip of classic TSR 4th edition Gamma World adventure is available once again from Wizards of the Coast, by way of DriveThruRPG. First up is All Animals are Equal while the second is Home Before the Sky Falls. Both are 64 page tales and can be had in PDF for $4.99 or in softcover for $9.99. 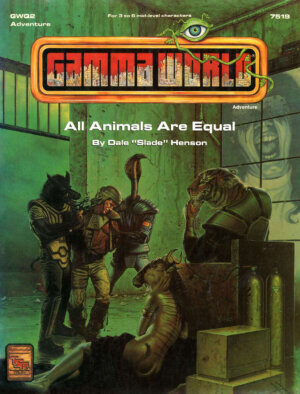 All Animals are Equal

Three-hundred years after the end of civilization, the creatures are running the zoo. Home to a bewildering array of talking, intelligent creatures, the ZOO has turned into a melting pot of political intrigue, assassination, and homicide. The factions bicker end battle over territory, food, water, and power.

Here in the zoo, humans are the outsiders. But when player characters enter the scene, they are welcomed as the means of upsetting the balance of power. The Pride, the Troop, and every other faction seem to have a past wound or old humiliation to settle. See what zoo politics can really be with All Animals Are Equal.

In the Zoo, only power matters! Get as much as possible, however possible!

Characters are drawn into the delicately balanced world of animal politics, where tooth and claw often take a back seat to treaties and promisies;

they must weave their way through this maze of alliances, feuds, and diplomacy,carefully considering when to stay neutral and when to take sides;

The zoo can easily be positioned in any campaign world;

The adventure is designed for 3 to 6 characters of levels 4 to 6. 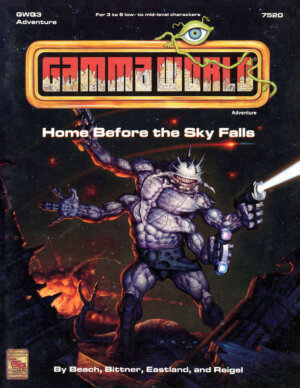 Home Before the Sky Falls

The fate of Bonparr hangs in the balance? and the key to the past is within reach!

Characters are drafted into the army of Bonparr for a special mission to investigate the stories of a terrifying war machine that is devastating the lands to the west.

Not only must this formidable machine be defeated, but the PCs must discover its origin and the reason behind its rampage. In fact, that may be the only way to stop it;

The adventure can easily be positioned in any GAMMA WORLD campaign;

This 64-page adventure includes data on the awesome Excelsior Class RMV battlesuit and previously unknown information about the fate of Grissom Air Force Base;

The adventure is usable by characters of low to mid levels.