Clockwork Publishing and Modiphius Entertainment have released two new adventures, through DriveThruRPG, for the Victorian era science fiction RPG Space 1889. First off is The Ether Calculator in which the players are tasked with protecting an analytical engine from a variety of ne’er do wells. The 40 page adventure is available in PDF for $6.00.

Second is On the Trail of the Gods which takes place entirely on Earth. While terrestrial adventurers have been visiting other planets since the 1870’s who’s to say aliens haven’t been travelling here much earlier than that. Find out the truth. The 36 page adventure is available in PDF for $5.00. 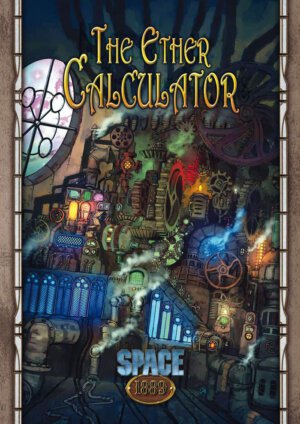 Analytical Engines are of special importance for the calculation of complex processes, especially in ether travel. The characters are invited to visit the Silesian Analytical Engine Productions facilities in Wroclaw where they are introduced to the innovative analytical engine ‘Ordination Fabricate OF 2001’, specially designed for operations in the ether. For this purpose, the hosts are planning to test the ‘Old Fritz’, as they fondly call the machine, on board the ether zeppelin ‘Von Neumann’, where the analytical engine is supposed to break a calculating speed record and make the headlines of the world’s newspapers.

What starts out as a simple publicity event suddenly leads the adventurers right in the middle of a criminal investigation and then onto an action-loaded maiden voyage, with demanding tasks for all types of player characters. It requires skills in social interaction, a sharp mind, quick reflexes—but also accurate marksmanship.

The Appendix includes an elaborate article on analytical engines in the alternate universe of Space: 1889 and provides optional rules for using these unique artifacts in the game.

This adventure is written for the Ubiquity Version of the Space: 1889 RPG. 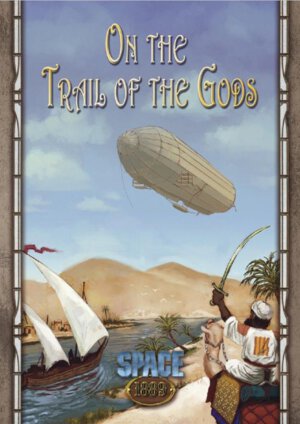 Since the inventors Edison and Armstrong set out on their first journey to Mars in 1870, there has been speculation about visitors from other worlds to Earth as early as the prehistoric times of mankind. Archaeologist Alastair Whitman believes he has found proof. The characters are invited to join the Glasgow International Exhibition in 1888 where they can learn about the latest technological inventions and even meet celebrities like Nicola Tesla. When the exhibition receives threats, they realise that Whitman’s discovery might be an explosive issue: Not just scientists are interested in it, and the characters have to take care that this knowledge does not fall into the wrong hands.

This adventure is set on Earth, especially in Glasgow (Scotland), Egypt, and the Sudan. The characters will journey through the Sudan where they will have to beware many dangers, such as the followers of the Mahdi, who are fighting about his succession. A long journey up the Nile will take them into currently unstable territories where the characters will be on their own. Will they choose the right company? Will they achieve the rescue of Whitman and escape his persecutors? The characters will learn the answer On the Trail of the Gods.

The adventurers can be of any nationality, even if the starting point of this journey is set in Scotland. The events in this adventure challenge various archetypes, especially Academics, Discoverers, Reporters, Scientists, and Soldiers, but other adventurous characters will be just as useful.

This adventure is written for the Ubiquity Version of the Space: 1889 RPG.