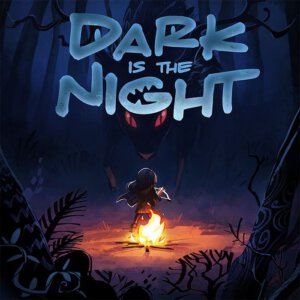 The two player “hunt or be hunted” game of cat and mouse, Dark is the Night, is currently just past the 90% mark for Kickstarter funding. The folks at APE Games know it’s spooky when you’re sitting around a campfire late at night. What’s even spookier? When you’re all alone, in the deep dark woods, and there’s a monster on the prowl! In Dark is the Night, one player takes on the role of a Hunter while another controls the Monster as each looks to eliminate the other before the sun rises.

Funding for the project runs through January 31st and you can reserve a copy of Dark is the Night at the $16 pledge level. Yes, you read that right, you can get the game for only sixteen bucks and even receive a miniature. Delivery of the game is estimated as August of this year.

A Hunter sets up camp in a dark and dangerous forest. She is awakened in the night by a sound in the darkness, just outside the light from her small fire. Again! A guttural growl informs the Hunter that she is not alone. To survive this night, she will need keen wits and sharp aim.

Dark is the Night is a two-player game of hunt-or-be-hunted. One player takes the role of the hunter and can move in the lighted spaces surrounding the campfire while the other player is the monster, secretly moving through the darkness. With only limited tools at their disposal, each player tries to eliminate the other before daybreak.