A two player game set in the world of Robin Hood is on the horizon from Rio Grande Games. Designed by Uwe Rosenberg, Robin of Locksley will pit competing Robin Hoods against each other in a race to steal from the rich to give to the poor. The game is for ages 10+, plays in around 30 minutes, and will carry an MSRP of $34.95 when it releases on November 14th.

Troubled times blight England since the good and just King Richard the Lionheart was captured in the Crusades. Meanwhile, Robin of Locksley is stealing from the rich Norman lords to free the King.

In Robin of Locksley, you aim to collect loot tiles with your Robin and sell loot collections of the same color. Move forward on the racing track surrounding the 5×5 loot tiles by spending earned gold. Every field will give you a task to gather fame: You may fulfill the task, or you may spend one gold coin to pass it. Whoever first circles the racing track twice wins.

Jeff McAleer
Founder/Editor-in-chief of The Gaming Gang website and host of The Gaming Gang Dispatch and other TGG media, Jeff tackles any and all sorts of games but has a special fondness for strategy, conflict sims, and roleplaying games. Plus, he's certainly never at a loss for an opinion...
Latest posts by Jeff McAleer (see all)
Tags: Rio Grande Games, Robin of Locksley, Uwe Rosenberg 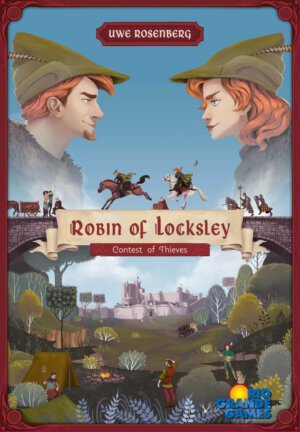 A two player game set in the world of Robin Hood, designed by Uwe Rosenberg, is on the horizon from Rio Grande Games.
0
Awful