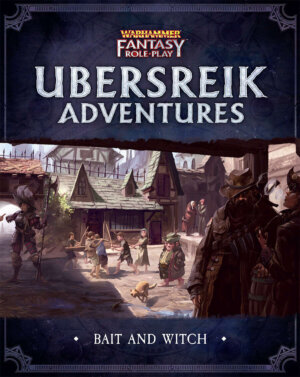 Cubicle 7 Entertainment has released the latest Warhammer Fantasy Roleplay adventure in PDF. Ubersreik Adventures: Bait and Witch is designed for a single session as the player characters are tasked with running interference to protect a hedge witch. The 13 page adventure can be had for $4.99 at DriveThruRPG.

Cordelia Wessenlingh is being stalked. Two strangers, witch hunters she thinks, have staked out her apothecary in the hopes that she will lead them to a friend of hers – a hedge witch by the name of Alex Grün. She needs someone to create a distraction so she can go and warn Alex, and it just so happens that a few likely souls have just walked into her shop…


Bait and Witch is designed to be completed in one session and is suitable for new Characters, or for those who have completed one or two short adventures. The scenario is set in Ubersreik, and introduces the Characters to Cordelia Wesselingh, an apothecary and useful contact in the fortress-town. Also included is a map of Whistlebone Alley, and suggested examples on how this map can be used to stand in for any back-alley scenes you may encounter in Ubersreik.

Bait and Witch is the third in the Ubersreik Adventure series, the primary setting of the WFRP Starter Set. Along with If Looks Could Kill and Mad Men of Gotheim, these adventures can be used as short standalone adventures, or easily slotted into any ongoing WFRP campaign.