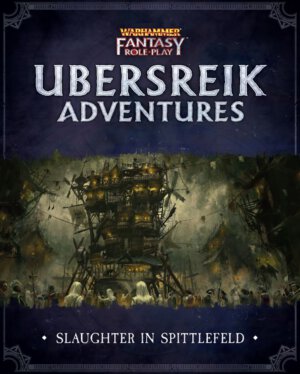 The latest adventure for 4th edition Warhammer Fantasy Roleplay has arrived from Cubicle 7 Entertainment. Ubersreik Adventures – Slaughter in Spittlefeld places the player characters right in the midst of a plague wracked tenement building with only one way to escape; learn what’s behind the disease before it’s too late! The adventure is perfect for new players and you can score the 16 page PDF at DriveThruRPG for $3.99.

A vile sickness spreads through the rookeries of Ubersreik. When the source is found by an investigating doktor, the Spittlefeld Tenements are quarantined. Armed members of the Watch are posted on all exits, and crossbows are aimed at every window. No one goes in. No one comes out. For the unfortunate souls trapped within, there is little hope of escape unless they can find the source of the infection. But that wants out, too. And if it can’t break free? Well, it won’t be the first time there is a Slaughter in Spittlefeld…

Slaughter in Spittlefeld is an adventure that explores the horrors of disease, and how it erodes not only the flesh, but also the minds of friends and neighbours alike. It takes place in Ubersreik, but could be moved to any suitably large city or town of the Empire. This adventure is suitable for four to six Characters in their 1st or 2nd Career, and should take about 4 hours to complete.

Slaughter in Spittlefeld is the fifth in the Ubersreik Adventure series, the primary setting of the WFRP Starter Set. These adventures can be used as short standalone adventures, or easily slotted into any ongoing WFRP campaign.