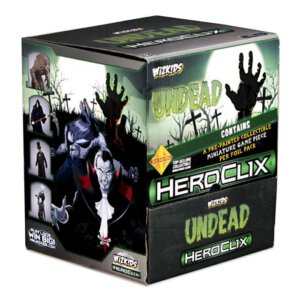 WizKids has announced the HeroClix: Undead line of prepainted minis, for the ever popular HeroClix game system, are now available. Gamers can bring Dracula (or at least a vampire who looks suspiciously like the Count), Dr. Jekyll, and other ghoulies to the table. There are 24 figures in total and each blind draw, individual miniature pack will carry an MSRP of $2.99.

Ghosts, demons, skeletons, and zombies rise up in WizKids HeroClix: Undead! Pit your favorite heroes against a horde of werewolves or team up with Dr. Jekyll! Scare the Clix out of your opponents!

In this 24 count gravity feed, there are 19 different figures to collect. The rarity breakdown is as follows:

With an impulse-friendly price point, single-figure foil packs are a great purchase for new and established players alike!