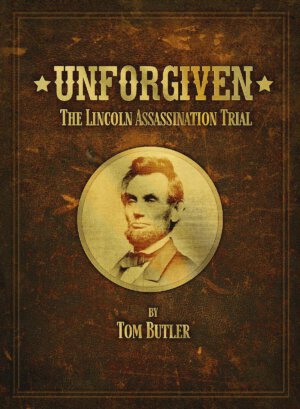 Now available, following a successful Kickstarter run, is Unforgiven: The Lincoln Assassination Trial from Green Feet Games. In the game, designed by Tom Butler, two players take on the prosecution and the defense during the trial of conspirator Mary Surratt. The game is for two players, ages 13+, plays in 30 minutes, and carries an MSRP of $35.00.

I really enjoyed doing a Kickstarter preview for unforgiven and you can check it out right here.

Ninety years later, the very government that Franklin helped create disregarded his wisdom and trampled the constitutional rights of its own citizens in order to feed what seemed an insatiable hunger for vengeance. Now you, as the prosecution or defense, must convince a nine-panel jury that Mary Surratt, one of eight people put on trial for conspiring to assassinate President Abraham Lincoln and other members of his cabinet, is guilty…or innocent.

Unforgiven: The Lincoln Assassination Trial is a two-player game that takes place during the May 9 – June 28, 1865 trial of the first woman, Mary Surratt, ever to be executed for treason by the United States. The game begins amidst the chaos of Lincoln’s assassination as the country struggles to heal over the wreckage of the American Civil War. Each player must persuade the jury to convict or acquit the accused and thereby win the game. To do so, players draft and play cards that help them strengthen their case with the jurors and recruit them to their side, while also finding overwhelming evidence for or against the accused.

In one of the most high-profile trials in U.S. history, will Mary Surratt again face the hangman’s noose of American justice — or can you stop the trap door from falling?