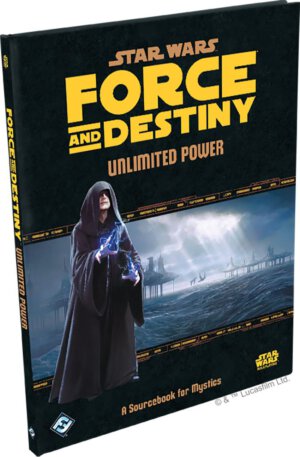 Fantasy Flight Games has the next supplement for their hit RPG Star Wars: Force and Destiny. Unlimited Power will focus on the mystical with more archetypes, races, specialties, and more. The hardcover will be arriving soon and carry an MSRP of $29.95.

The dissolution of the Jedi Order has reopened alternative paths of communing with the Force; no longer bound by strict rules and regulations, the Mystic interacts with the Force in ways that might seem foreign to the Jedi of old. Some have merged their politics with the Force while others imbue artifacts with the power of the Living Force through alchemy. Unlimited Power is a new sourcebook for Mystic characters in the Star Wars: Force and Destiny roleplaying game, expanding their options from the core rulebook by introducing three new specializations, new species, new equipment, and more.

Players will find everything they need to make a Mystic character in this full-color 96-page handbook, including the Alchemist, Magus, and Prophet specializations as well as new Force powers. Game Masters looking to tie their campaign to the Force will find adventure hooks and tips for integrating Mystic characters into their campaign. The path of a Mystic is one of attunement with the Force; unlock your Mystic’s full potential and discover Unlimited Power in this new sourcebook.