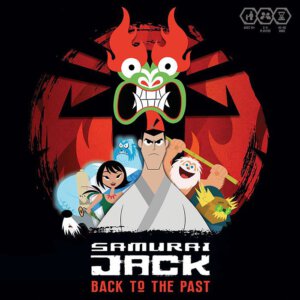 USAopoly has announced another summertime game release and this title bring the Adult Swim series Samurai Jack to your gaming table. In Samurai Jack: Back to the Past, two to five players will lead Jack and his friends in a time bending adventure based on the show’s final season. The game is for ages 13+, plays in around 45-60 minutes, and will carry an MSRP of $34.95 when it arrives in Q3.

Based on the fifth and final season of the animated series, Samurai Jack: Back to the Past picks up the title character’s mission to return to the era before the reign of his adversary, the evil demon Aku. Jack’s friends accompany him along a path, comprised of various locations from the series, to defeat villains and finish with the most honor. Winning requires utilizing allies, traits, and weapons while guarding Jack’s sanity, taking players on an unpredictable ride that mirrors the story-rich episodes revered by critics and loved by fans.

Samurai Jack: Back to the Past features custom sculpted figures for Jack, Aku, Ashi, and more characters from the series.