USE ME – Eldritch Horror Now Available

A new quick playing, low cost, skirmish game of otherworldly horror is now available from 15MM.co.uk. The release is part of their ‘Ultra Simple Engine for Miniature Engagements’ system (or USE ME) and is entitled USE ME – Eldritch Horror.

The world we see is nothing, an illusion, of banal normality that covers a richness of cosmic horror that would blind and destroy the minds of men and render them senseless in the gaze of things far greater and older than imagination can conceive. But despair not! We refer not to the real world but instead to that of the thirteenth (no coincidence!) title in the USE ME series…An Eldritch Horror.

This title was born out of a fire of creativity in only a few weeks in a joint effort by O.G.Joel and G.B.Syme and given the thirteenth code in the series, as befits it, in response to a growing number of wargamers requests for a simple system to cover this genre of cosmic horror. The D6 engine is fast play and well suited to 15mm scale miniatures. Lead your party of characters against cultists, against insidious forces and against the Elder Gods themselves…but will you or madness prevail?

The USE ME game system. You will need some miniatures, some terrain and a few six sided dice (D6’s) to play the game. This is not much and indeed most of the time everything in play needs only 1D6 roll to make a decision. In the game all miniatures and vehicles are de-marked into of CHARACTERS (from Infantry to Vehicles and everything else) and these into TYPES which allow you to create anything you want from this period with a few tables of TYPES with points costs attached.

The Turn Sequence of the game follows a simple path of firstly the Initiative Phase where all players roll 1D6 and the highest roll wins the initiative for the turn (important later on!). Then the main part of the turn, the In Play Phase where all characters in the game are activated not by the side upon which they fight but by their Elan Rating. This means better troops and vehicles move and fight before poorer quality troops and vehicles and within each Elan banding from 6 to 1 activation begins with the initiative holding player. When activated each character can choose TWO actions, these include move, ranged fire, melee, hunker down, special action, unique action. The character may choose two different actions OR the same one twice with a modifier; very flexible in battle. Ranged fire and melee are based on opposed single D6 rolls with modifiers for troop type and weapon ratings. This super fast system results in targets being Killed, Struck or Winged by attacks. Killed removes them from play while the other two results negatively effect their further performance in the game. The hunker down action allows characters to take cover against attack while special actions cover those things detailed in the USE ME Advanced Rules and unique actions are created when needed for a scenario.

In small games of USE ME every character acts on its own, this is a skirmish, but in larger games a simple mechanic allows you to combine three to ten characters into one TEAM which then acts under its leader in play. All actions are no more complex than for single characters. 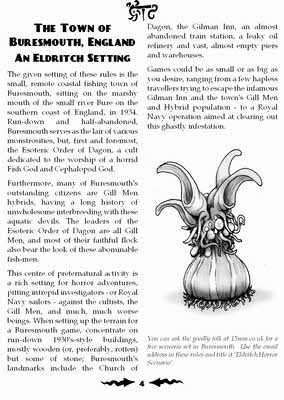 The USE ME advanced rules. After the rules engine for the game come the advanced rules which give a real flavour of the Eldritch setting. These include Summoning Beings From Beyond, rules for Madness among characters, a dozen or so special rules for creatures (such as Mass of Eyes, Acid Blood etc), special rules for sorcery and spells and also how to create and use Atrefacts in play.

The Eldritch Character Tables. A rugged points and character creation system is given in the book which includes two sets of tables, one for mortals or humans and the other for ‘horrors’. These horrors include all of the creatures and elder gods that come under the mythos of the game setting. Between these two tables you can build almost any character.

British Isles Army Lists. This title is set in a fictional Britain of the 1930’s and as such it supplies you with suggested force lists that suit this setting. These are only suggested lists but they give you a jumping off point for your scenarios and campaigns. These lists include The British Army, the British Police, Investigators, Cultists, Eldritch Gods and Beings, Gillmen, Undead, Aliens and Servants of the Cephalopod God. Each of these lists also gives some background and setting along with a few suggested miniatures to use from the HOF and other ranges. You can find all of these on the 15mm.co.uk website but of course you can use any miniatures you want from your collection.

After the USE ME game finishes. Most of the time you will want to play a quick game, cause some carnage and send a lot of little metal men to their dooms. But it need not be the end if you want to carry on. USE ME has mechanics in it for updating your Force Roster (with your characters on it from the game just finished) to see what happened to those characters who were Struck or Winged in play to see if they recover in time for the next encounter. This makes rolling those dice nail biting and really important for the next scenario. Plus you can make a second lot of rolls for any characters Killed in play to see if a slim chance of them rejoining your forces for the next game.

Solo Play in USE ME. This booklet contains a solo play system which means that when no human opponent is present or if you want a practise you are able to do this alone and at a time of your choosing. The solo play addition allows forces to be fielded and statures chosen to determine their behaviours against your actions in game.

USE ME is a pocket rule system that does not pretend to be anything else. Its fast, its fun and its affordable. With many rule systems these days taking themselves far too seriously and with some being priced at an amount that makes purchasing them a long term goal for most of us USE ME gives you what it promises and in a format that will make you smile.

Jeff McAleer
Founder/Editor-in-chief of The Gaming Gang website and host of The Gaming Gang Dispatch and other TGG media, Jeff tackles any and all sorts of games but has a special fondness for strategy, conflict sims, and roleplaying games. Plus, he's certainly never at a loss for an opinion...
Latest posts by Jeff McAleer (see all)
Tags: 15MM.co.uk, Eldritch Horror, USE ME