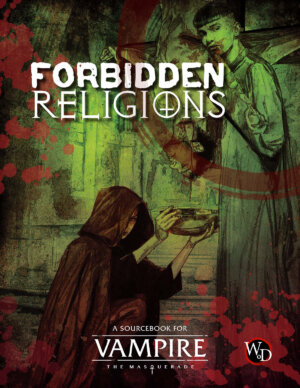 Renegade Game Studios has released their edition of Forbidden Religions for the fifth edition of Vampire: The Masquerade. Originally from Onyx Path Publishing, this sourcebook provides plenty of info on various faiths stricken from the vampire histories. The 94 page hardcover is available starting at $29.99 at DriveThruRPG or grab the PDF for $14.99.

How dreadful, how perverse, how malicious would a Kindred faith need to be, to be considered “forbidden”?

Within this book you will learn of religions stricken from the records of vampire scholars. Within, you shall find a collection of beliefs, some pernicious enough to collapse domains, others so focused that they possess only a handful of coteries the world over.

Each faith is clandestine.

Each religion is taboo.

Cainites consider these beliefs anathematic to the fragile existence of Kindred society. Vampires do not advertise themselves as members of these cults: they plot, they survive, and they worship in secret. If they do not, they will surely be hunted to their final deaths, as threatened archons and Princes seek to silence their forbidden thoughts.