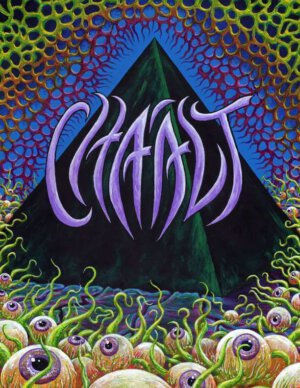 A recent OSR inspired setting from Kort’thalis Publishing, aught my eye and I’ve got to say looks mighty interesting. Written by Venger Satanis, Cha’alt promises plenty of far out science fantasy/post apocalyptic roleplaying action and adventure. You can score the 218 page PDF for $20.00 at DriveThruRPG and physical copies should be available in October.

Who has the balls to confront this dark psychic force?

Cha’alt is the beast of a book I’ve been working on for the past year.  It’s a ruined world focusing on a couple of introductory dungeons before getting to the main event – the megadungeon known as The Black Pyramid.
The Black Pyramid is like nothing you’ve ever seen before.  Unique design, purpose, feel, magic items, NPCs, monsters, factions, motives, agendas, strangeness, the works!

Cha’alt is compatible with both old school and 5e D&D purposefully blended for maximum usability.  Full disclosure: aside from advantage/disadvantage and bounded accuracy, there isn’t much in the way of 5th edition mechanics. It’s predominantly OSR.

I’ve included my own Crimson Dragon Slayer D20 as an appendix, but you can use any of the hundred RPG systems available to run Cha’alt as your own.  The rules-language is fairly neutral, and my priority was helping the Game Master at the table.

The world is gonzo, eldritch, science-fantasy, and post-apocalyptic.  It’s a wild ride, perfect for those players seeking something a little bit different, but also recognizable.

The interior is gorgeous full-color art, layout, cartography and Lovecraftian aesthetics.  Gold ENnie winner Glynn Seal of MonkeyBlood Design went above and beyond his usual fantastic job.  Give the new 32 page preview a look.  I spared no expense making Cha’alt fantastic – this world is alive and spilling over with possibilities.

Cha’alt should give you years of solid, non-standardized gaming.