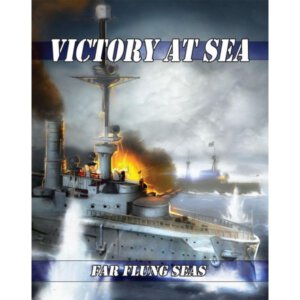 Mongoose Publishing is releasing a new supplement book for their WWI rules Victory at Sea: Age of Dreadnoughts entitled Far Flung Seas. Comprising additional fleet lists, Far Flung Seas rounds out the major protagonists of the Great War in miniature. The supplement will be available this June but preorders are now being taken.

Far Flung Seas is a supplement for Victory at Sea: Age of Dreadnoughts WWI naval miniatures rules. Comprising additional fleet lists, Far Flung Seas rounds out the major protagonists of the Great War. In the Mediterranean, new lists cover the Italian, Austrian and French fleets. Further afield, the US Navy list in Age of Dreadnoughts is greatly expanded to cover the rest of the Fleet, in addition to those vessels that fought with the Royal Navy in the North Sea. From the vast reaches of the Pacific, the Japanese Navy joins the fray, taking part in the pursuit of von Spee’s squadron, raiding German territories around Tsingtao and Rabaul, and (for those of a hypothetical persuasion) challenging the US Navy for dominion in the Pacific in the aftermath of the Great War. Finally, a few old friends have their fleet lists expanded slightly, with a few ships that did not make it into Age of Dreadnoughts.
As well as new fleet lists you will find an additional campaign map to cover the Adriatic, as well as a new operational campaign system and an spanning the Mediterranean at the outbreak of the Great War. Far Flung Seas also expands into small ship actions with new rules covering coastal forces such as the Royal Navy’s Coastal Motor Boats, the Italian VAS and MAS boats, and other small craft.
Tags
Far Flung Seas Mongoose Publishing Victory at Sea