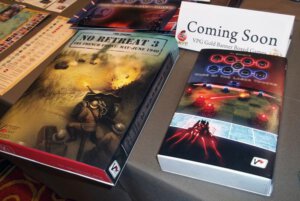 They are almost here, the new line of boxed games from Victory Point Games (VPG).

Although Victory Point Games has long resisted putting our games in boxes, the invasion of that idea could not be resisted in the face of changing circumstances. Our plans for growth included reaching out to game wholesalers and retailers this year, and they have made it very clear that their customers want boxes! Consequently, the past several weeks has seen us go through stages of shock, introspection, soul-searching, decision, defiance, and determination. So, boxed games, here we come…

Our boxes are not typical game boxes that you receive from Hasbro or Fantasy Flight, with a cover that fits over a base. Typically, the manufacturing and assembly of these games is done in China, and we want to keep manufacturing and assembling our games in America, right here in Costa Mesa, California. Thus, our game boxes are assembled by us, folded from pre-cut cardboard (not unlike pizza boxes). We have two box sizes: the “Deluxe” (a.k.a. “bookshelf”) size, which shares the approximate dimensions of a standard GMT “bookcase” box, and our “Standard” size (which is half as big, and is another standard size on the game shelves for smaller games). Unlike other company’s boxes, which are 2” thick, ours are only 1.5” thick, but that’s a very good fit for our traditional small-format games.

Inside the box, you’ll find some new things too. In addition to a great Victory Point

Games, in which we pack lots of great gameplay, you’ll find – wait for it… larger dice!

The plans (subject to change) for possible insertion into VPG game box include a charcoal pack (to help absorb the rustic smell of the laser-cut counters) and an “official” VPG napkin (with instructions for removing any counter soot).We plan to include [brace yourself] a mounted game board and, when we do so, we will also include a paper game board as well (giving you a choice of which playing surface you would like to use.

The mounted game boards are affixed to standard counter stock (not the extra-thick stock we’re using for Gold Banner counters, but the standard stock we use for all of our other counters). They are not of the folding variety, but are instead “puzzle-cut.”

The bottom line is that you will have options when acquiring your next VPG game: a boxed game with a mounted board (when available) and larger dice (at a boxed game price), or the traditional poly-bagged games that you enjoy now (at our usual price). The former will generally be available in stores (depending upon our agreements with some designers), but both will be available directly to you via our web site with our usual prompt and caring customer service attached.