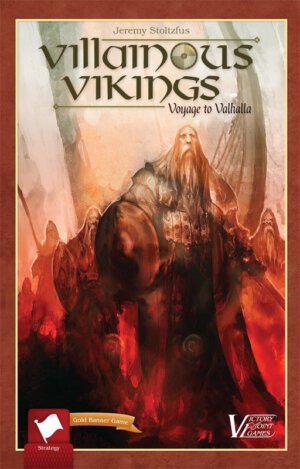 Following a misstep with the initial release of the title (as well as a heartfelt apology from Victory Point Games publisher – and friend of TGG – Alan Emrich regarding that release) Villainous Vikings is set to sail with a second edition. The game, designed by Jeremy Stoltzfus for three to five players, is available right now for an MSRP of $36.99.

The longship’s prow cuts into the sea after each swell, splashing salt water into my face as the crew rows hard towards this new land. I grip the railing to keep my feet, dreading the day because of the völur’s prophecy. The shore approached fast and I have no way of knowing if raiding the town or trading with its people will bring the doom I fear. – Ingvar the Far-Travelled

In celebration of BGGCon, receive a unique Viking Captain themed after BoardGameGeek.com’s Ernie the Geek per purchase of Villainous Vikings! Hurry while supplies last!Ernie promo

Your goal in Villainous Vikings (Voyage to Valhalla), by designer Jeremy Stoltzfus, is to amass as many Valhalla Points as possible so that after Ragnarök occurs your Captain has the best seat in Valhalla to tell his tales of battle and drink his mead. You will gain Valhalla Points by raiding, trading, and battling the other Captains who are also vying for Odin the All-Father’s favor.

After one of the players has been declared the victor of Ragnarök, each player will tally up their Valhalla Points to determine their overall standing with Odin the All-Father and the other Gods; whoever is in the best standing is considered the greatest Viking(s) in history!

In this Second Edition, everything in the box has been revised for better balance and clarity: the map, the cards, the rules, and even the counters.

Note: This game is currently only available in the boxed version.