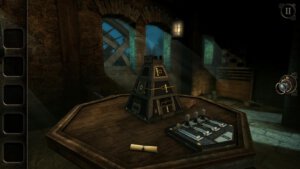 If you’re much of a fan of mobile gaming, chances are you’ve come across Fireproof Games’ The Room series. Having first debuted a few years ago, it’s now on its third installment (The Room Three) and has become one of the most reliable series in mobile gaming, if not gaming in general.

In each title, your goal as the player has been to explore environments in search of new clues, which generally come in the form of cryptic notes from an acquaintance you’re chasing. Plot-wise it’s all a little vague, but the idea is that said acquaintance has stumbled on an Earth-shattering mystery—a new element that unlocks secret dimensions and worlds within worlds. As he dives into these worlds, the acquaintance has left behind enough hidden clues for a worthy follower (you, the player) to chase after him. Thus, you find yourself unlocking puzzle boxes and solving riddles, always in search of the next creepy clue or the newest transition to an unexplained realm.

The games have thrived not just thanks to this intriguing setup but largely because they’re gorgeously rendered. Fireproof Games is operating at the pinnacle of mobile gaming with the visual and audio quality of this series, such that if you play the games with the lights off and the volume up you can actually freak yourself out. They’re that immersive.

With The Room Three, which debuted in November 2015, the developers are essentially providing more of the same, though the story has evolved. At the outset, you’ve escaped the quest of the first two games, only to be pulled in by a newer and deeper mystery that proves the events of the previous games have had a lasting effect on the protagonist. You’re roped back into a new series of rooms and puzzles to solve, and the supernatural elements that lurk around every corner are more mysterious than ever before.

Playing through this latest installment, however, I can’t help but recognize that there’s a deeper yet simpler appeal to The Room games than the sensational atmospheres and teasing mysteries. The more I thought about it, the more I realized that for all their complexities these games are based on one of the oldest tricks in all of gaming: treasure hunting.

Now, you can pick out just about any game and say that, at its core, it’s about earning rewards and achievements. Whether you’re talking about old Super Mario games in which you collect coins on a continual basis, or the latest first-person shooter in which currency plays a large role, you can find “treasures” in most any title. But the actual conscious search for hidden trinkets, riches, and clues is its own version of video game treasure hunting, and it’s one that’s present in various forms of modern gaming.

One of the most overt examples comes just where you might expect to find a treasure hunting game: in the form of an online game of chance, in this case situated at Lottoland. Gonzo’s Quest actually starts out with an animated introduction of a Spanish explorer off the coast of Peru, abandoning his ship to go out in search of riches on his own. In fact he (Gonzo) appears to be in search of the mythical golden city of El Dorado, and of course, along the way, you can uncover actual riches through the slot reel. It’s essentially a real treasure hunt enriched by the theme of a mythical one.

But there are also examples that have nothing to do with winning actual cash, and rely instead upon the thrill of uncovering a hidden reward even in a video game. Think for instance about some of the open-world adventure games that have become so popular in the past five or ten years. Ubisoft’s games have probably done it best, with titles like Far Cry and Assassin’s Creed frequently offering all kinds of little goodies in boxes that can help you along your way. In particular both Far Cry 4 and Assassin’s Creed: Black Flag excelled with treasure hunting, as they offered players the chance to quite literally explore hidden nooks and dive into deep water in search of chests of riches.

The same excitement that accompanies hunts and experiences like these is what’s really at the core of the Fireproof Games series, and what makes The Room Three such a satisfying experience. Yes, the story keeps you hooked (despite its own vagueness), and yes, the atmosphere is unrivaled. But what really drives the game is the curiosity to see what’s inside the next box, or cupboard, or table. There’s a long series of objects to unlock, and finding your way to the contents is even more thrilling than actually finding out what’s inside. In the end, like so many other games when you boil them down to the basics, it’s just a really engaging treasure hunt.