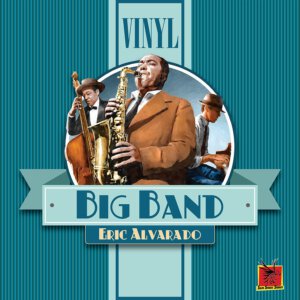 A new expansion for the musical themed board game Vinyl and a new two player edition have funded on Kickstarter for Talon Strikes Studios. Vinyl: Big Band brings the popular 1940s Swing and Jazz genre to the collecting game while Vinyl: Jukebox is a fresh two player take on the game. The project, which is fully funded, has plenty of options available and you can reserve a copy of Vinyl: Jukebox for a $16.00 pledge or grab the Big Band edition for a $24.00 pledge through August 21st. Expected delivery for the new releases is August 2021.

One weekend, you find yourself cleaning the family attic. During your cleaning, you stumble upon an old turntable and a small collection of vinyl records. You blow the dust off and bring the find downstairs to the den. After setting it up, you place the needle down on an album you vaguely remember hearing when you were very young. As the album spins under the needle, you sit back and look at the album cover and insert. Warm sounds begin to fill the room as you are instantly transported to another world. You listen to the wonderful notes playing while following along with the lyrics. After the needle reaches the center, you shoot up out of your chair and hop on the computer — you want more! You locate the nearest record store — Record Town. You hop in the car not really knowing what to expect. After arriving and parking the car, you pull back on the door into a musical paradise. Welcome to Vinyl!

Vinyl is a game where players are aspiring vinyl collectors. They have some knowledge of what they would like to collect, but immediately get immersed in the experience. Players will acquire morsels of information after visiting the “Mag Rack”. That information will lead them to the bins where they select albums to add and expand their collection. Albums can be played at the listening booth to increase the value of a player’s collection and their ability to collect even more albums. Unfortunately, the inventory is limited and other customers may be targeting the same vinyl gems. After the final round is concluded, players will tally their collection’s value and 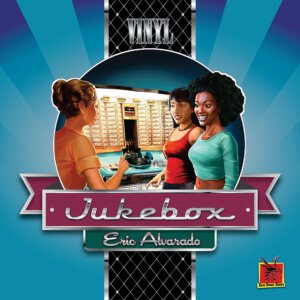 determine who is the Elite Collector of Vinyl!

Vinyl: Jukebox is a two-player light-weight set collection game where players are constructing a jukebox with 45s. These 45s come in five genres, three decades, and have great songs on either A or B sides. To collect these 45s, players must draw coins out of their bag and select one of two slots to insert the coin into. The player will continue until the desired match has been made OR their slot(s) are full of coins. As 45s are acquired, they are placed into a 3×3 grid near their player board. When three 45s form a row or column, it is scored. As the player’s pocket empties, the player may empty their coin box and earn two bonus coins. Keep in mind, at certain points in the game, the player’s opponent will be able to benefit from the player’s decisions getting free actions to insert coins into their own player board. When a player acquires nine 45s, the game end is triggered. The players add their score up from the scoring tokens acquired during play plus the points from their private objectives. The player with the most points is winner.

Big Band is a Vinyl expansion that continues to build on the base game of Vinyl and introduces the Window Display, Hits Chart, and a new way to form collections. Historically, 78s and 33s were competing formats and available to purchase in the record store. In BB, players will focus on collecting albums from two genres — Swing and Jazz. Players will acquire albums in two different speeds from up to 8 different band leaders. With respect to speeds, there are benefits in collecting 78s since they are worth slightly more than the 33s. However, the 33s offer collection powers to entice players to collect them instead. Furthermore, the rules for collecting albums are stripped down to just matching the genres. However, players must visit the front counter in order to earn collection rewards. To turn in a collection, the player must represent each of the four instruments in one genre. Depending on how many matches there are in the attributes will dictate what type of collection reward they will earn. Play continues until all the albums have been placed into the store. The player with the most points, in the end, is the winner.