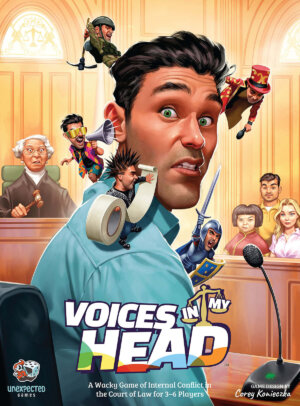 Coming soon from Unexpected Games is Corey Konieczka’s latest design Voices in My Head. In this one versus many game a prosecutor will try to convict a bank robber while the other player take on aspects of the defendant’s personality aiming to fulfil their goals. Voices in My Head is for three to six players, ages 12+, plays in around one to two hours, and will carry an MSRP of $39.95 when it arrives in Q1.

Robbing that bank was not your brightest moment. Should you just confess or try to get away with it? As you prepare to testify in court, conflicting thoughts fill your head. Which voice should you listen to?

Take control of different aspects of Guy’s personality as the prosecutor tries to convict him. From Honesty to Selfishness, each persona has a different secret goal. Just about anything can happen in this wacky trial, and your actions will determine Guy’s fate!

From the prosecutor to the personas, everyone has a unique role to play in this unpredictable trial.

The fight takes place both inside the courtroom and inside Guy’s mind. His focus and goals will swing wildly as players grab control of different regions of his mind. Even a small action like a yawn or a wink at the wrong moment can have drastic effects on the trial.

The prosecutor’s goal is to have more jurors think Guy is guilty than innocent at the end of the game.

All other players take on different aspects of Guy’s personality, such as Honesty or Selfishness, and strive to fulfill your hidden goal.

Each trial card presents a pivotal moment in the court case. How Guy reacts to these moments will place tokens on the jurors to help or hinder your goal.

As Guy continues to testify, what impulses will you choose to control and how will you sway the jury’s opinion?

Will Guy go to prison? Will he make a fool of himself in the courtroom? Will his lawyer finally win a case? Will he ever figure out what was in that breakfast burrito? The case rests in your hands. 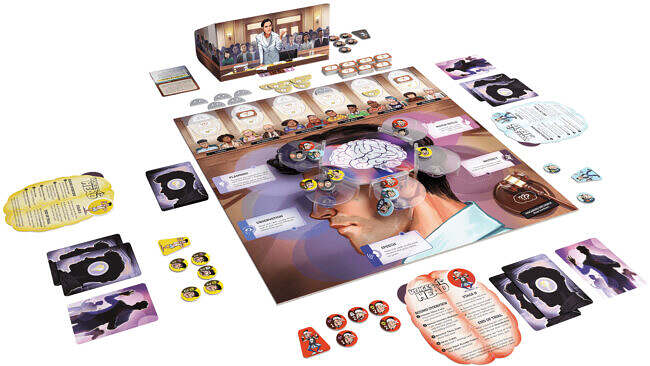