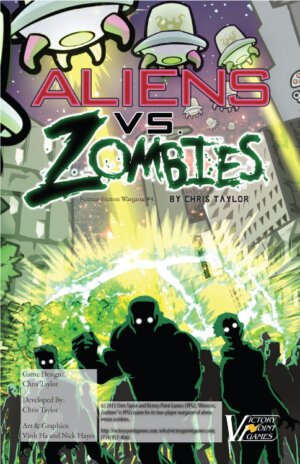 Aliens? Zombies? Who will win? Well, it looks as if humanity has lost and now invaders from space and undead legions will duke it out for the planet Earth! Aliens vs. Zombies is the latest Chris Taylor design released by Victory Point Games. This low complexity two player game can be completed in under an hour and looks as if it has the casual gamer (or those looking for some quick fun) in mind. The title is now available for an MSRP of $19.95.

Aliens vs. Zombies (“AvZ”), by designer Chris Taylor, is a two-player game about the life and death (mostly death) battle between two natural enemies: Aliens and Zombies. The Aliens attacked the Earth and destroyed 99% of humanity using orbital death rays. However, the weapon interacted strangely with human DNA and caused an unforeseen mutation! Within 24 hours of death, the recently dead arose and slowly shambled aimlessly with purpose in the general direction of the Alien attackers to take their revenge.

Aliens vs. Zombies is a small, low-complexity wargame for beginners, children and light-hearted fans of aliens and/or zombies. The aliens are invading a small town. A side effect of their weapons used to conquer humanity is the reanimation of the newly dead, who are out for revenge!

The alien player has fewer units but has the advantage of superior weaponry and armor. Zombies are plentiful and are divided into different types: rotting, tough and fast. Both sides can move or attack during their turn. Each side has one unique action: aliens can blast away with exploding dice and zombies can chomp their opponents to create new allies.

Each turn a tile is revealed with a number of zombie spawns and special events. After the 8th turn, the zombie dead (those deader than usual) are counted to determine the victor.

Which side will you choose? Choose wisely and conquer, in Aliens vs. Zombies!