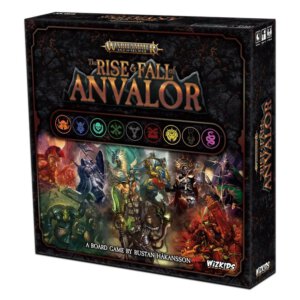 WizKids will team up with Games Workshop to release an all-new board game set in the Warhammer Age of Sigmar setting. The Rise and Fall of Anvalor will take players on a roller coaster ride of trying to defend Anvalor while also maneuvering for position in which to place themselves in power over the city. The game is for one to four players, ages 14+, plays in around an hour and will carry an MSRP of $59.99 when it arrives in April 2019.

Get ready for a new kind of Warhammer Age of Sigmar excitement. In The Rise & Fall of Anvalor, your official task is to help build and defend Anvalor together with the other Factions. However, your real goal is to gather the most Influence and secure dominance over Anvalor, even if it might ultimately cause the fall of the city. Gather the most Influence for your Faction by building City Buildings and defeating enemies during vicious assaults. At the end of the game, the player who has the most Influence over the city reigns supreme and secures their dominance over The Great Parch!

With over 180 tiles in total, 9 different factions (6 player factions and 3 enemy factions), and 4 play variants (beyond the standard game), there’s an enormous amount of game-play content!

In the region of Aqshy, even if your uneasy allies place their resources in the perfect place, your mutual enemies can be strong and unpredictable. You’ll build resources to block your allies from developing their strongest options, and they’ll return the favor. They’ll weaken enemies, and you’ll try to deliver the killing blow. Each turn will provide many choices, so you’ll get to pivot as you learn the strategies best suited to your common enemy as well as your allies. One thing’s for certain: Whether Anvalor survives the siege or not, things are sure to get heated!