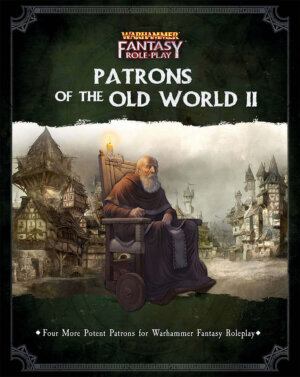 Cubicle 7 Entertainment has released a new supplement for Warhammer Fantasy Roleplay. Game Masters can look forward to four new fully fleshed out NPCs in Patrons of the Old World II. The 18 page PDF is available at DriveThruRPG for $3.99.

In Patrons of the Old World part 1, we met a cunning investigator, and Elf diplomat and a talented actress. Part 2 offers another unique set of NPC’s including a once mighty Wizard and wise woman of the woods to include in your next WFRP adventure!

Steeped in subterfuge, machinations and kingdom building, stepping into the Old World is no task for the fainthearted — even with an esteemed mentor to guide you across the Reikland’s rough terrain — there’s no guarantee that some might lead you down a dark alley. Amidst the daily struggle for survival, some remarkable, resilient, and deeply ambitious individuals rise above quotidian concerns to reach for something great. World-weary wizards, hopeless dreamers, and ruthless prophets — all strive for far more than mere survival. These powerful and charismatic patrons just need a bit of assistance to achieve it. Full of incredible knowledge and useful information, these patrons might prove invaluable to your party, but in a grim and perilous world, just who can you trust?

Warhammer Fantasy Roleplay Patrons of the Old World II details four unique NPCs, each with their own string of plot hooks and an ultimate goal for Characters to aid — or hinder — them in achieving. Though located in the Reikland, each may be dropped into an ongoing campaign anywhere in the Empire. Each NPC makes an excellent patron for a group of adventurers, providing several hooks to inspire GMs in creating a series of linked adventures that conclude in the finale with a lasting impact on the Characters’ lives — if not the Empire at large.

Patrons of the Old World includes:

The Empire is a nation mired in political connivings, injustice, warfare and want — with layers upon layers of resentment and an in-depth knowledge of the Old World, these powerful patrons will liven up any WFRP adventure. Patrons of the Old World II is an excellent and entertaining addition to your gaming table. Packed with NPCs and exciting adventure hooks, this supplement will kickstart your next adventure in Warhammer Fantasy Roleplay!