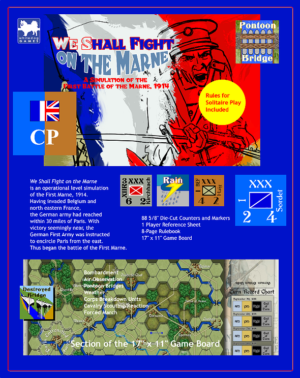 White Dog Games has released We Shall Fight on the Marne which looks at the WWI battle of First Marne from an operational level. The title is available as a boxed game for $33.00 or in a ziplocked version for $23.00 and those rices include shipping.

We Shall Fight on the Marne is an operational level simulation of the First Marne, 1914, for two players or solitaire. Game features include bombardment, air observation, pontoon bridges, weather, corps breakdown units, cavalry scouting/reaction, breakthough movement, and forced marches. Solitaire rules are included.

Tags
We Shall Fight on the Marne White Dog Games