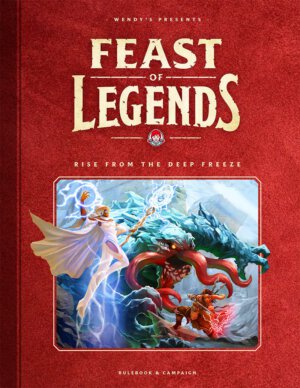 You might think this is an April Fool’s gag rolled out a bit early but, no joking, Wendy’s has unveiled a roleplaying game where you’ll take on the evil McDonald’s. Feast of Legends isn’t some 10 page PDF lark either but a fully fledged, fantasy 5E inspired 97 page core rulebook and campaign. Of course it’s an absolutely free download.

The Fight Against Frozen Beef

The nation of Freshtovia has been the lone beacon of hope in the land of Beef’s Keep for decades. However, the Ice Jester and his rogues gallery of frozen fiends threaten Queen Wendy’s reign of prosperity. Prepare your heroes for adventure.

Feast of Legends is what is known as a tabletop role playing game. Using the book you can create a character and choose every aspect of who they are. The players will interact with the story that one person, your Game Master, leads you through.

This is a game where you become the character you create and act out the adventure. Get your friends together, and that one guy from work that always explains the intimate details of every graphic novel he reads, and dive in to the game!