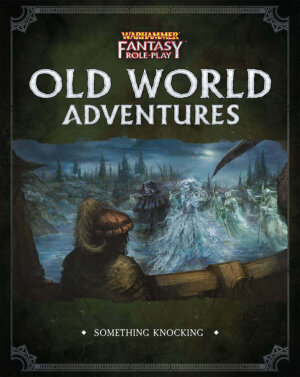 Cubicle 7 Entertainment has released a new Warhammer Fantasy Roleplay adventure in PDF. Something Knocking tasks the players with solving a mystery while tangling with river pirates. The 20 page PDF is available at DriveThruRPG for $3.99.

The Empire is a sea of trees and wilderness, punctuated by all too seldom islands of civilization and security. Its roads are winding, muddy tracks, plagued by bandits and worse. No wonder then that most who can afford it travel by river barge, and the waterways of the Reikland are alive with trade, travel, crime and adventure. Most major settlements of the Empire are built upon the banks of one of the great rivers that flow through the nation. Together these rivers form an extensive network, tying the vast Empire together.

Something Knocking takes place on just such an artery of trade and trouble. A band of pirates has been the cause of a great deal of trouble along a stretch of the river, and strange phenomenon has been linked to their activities. The Characters may have to form an unlikely alliance and dip into the murky waters of folklore and magic to solve a mystery and bring the reavers to justice.

In the early sections of the Enemy Within campaign, the Characters spend a great deal of time navigating the wide and majestic Reik, and there is plenty of opportunity for GMs to run short scenarios set on a waterway. This scenario would be perfect to play during Death on the Reik, or as the Characters travel between Altdorf and Bögenhafen during Enemy in Shadows. It also works perfectly well as a stand alone adventure, or for use as part of an ongoing campaign set in the Reikland.