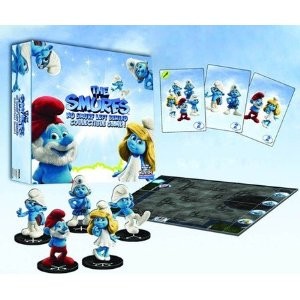 No Smurf Left Behind is out just in time to get your Smurf fix on.  Maybe you don’t give a smurf about the movie, but your kids will love this smurfin awesome game from WizKids.  Players get to play as one or many of their five favorite Smurfs (Papa, Smurfette, Brainy, Clumsy, and Fred) or play as Gargamel to try to stop those smurfin Smurfs using your powerful magic.  Will the Smurfs get back to the portal in time to get to their village?  Or will Gargamel kick the smurf out of them?

Each game comes with five painted Smurf miniatures, a game board, cards, and rules.  In my opinion though, I think the Gummy Bears could smurf the Smurfs back to the smurf age.

I did at first think that this was a game about the Smurfs left behind after the Smurfture, but it turns out this wasn’t the case.

And no, I know it isn’t Fred, it is Gutsy Smurf.  You think I got smurf for brains?