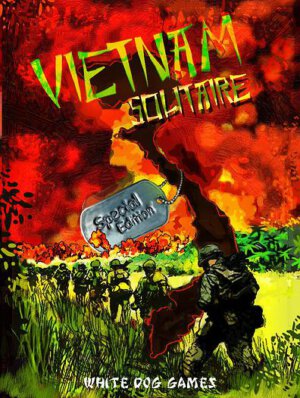 The latest title from White Dog Games is now available and it’s a solo title which allows players to tackle the U.S. involvement in Vietnam. In the aptly titled Vietnam Solitaire you’ll have the opportunity to play through the entire conflict or choose from three shorter scenarios. Vietnam Solitaire is out right now and the boxed edition can be had for an MSRP of $36.00.

“Our objective in South Vietnam has never been the annihilation of the enemy. It has been to bring about recognition in Hanoi that its objective–taking over the South by force–could not be achieved.”

Beside the Original and Special Edition campaign games that cover the entire war, three scenarios are provided: Tet 1968, The Fall of South Vietnam, and The Easter Offensive. In addition, there is a two-player variant. Optional rules are available for Ruff-Puffs and Limited B-52 Effectiveness in Laos and Cambodia. Political Points are used to raise and move troops and conduct some combats. The game features US/ARVN and Insurgency Combat as well as NVA/VC Offensives.