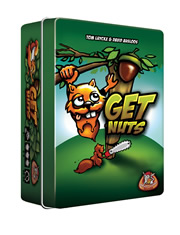 White Goblin Games, the Dutch board game publisher that has made a name for itself last year with titles like Rattus, Hotel Samoa, Inca Empire and Norenberc, is about to Get Nuts! Well, fortunately enough, not literally. The publisher has just announced an international release for the brand new card game Get Nuts, which is scheduled for release this quarter.

The end of autumn is near and those lazy squirrels still didn’t fill their winter stack! Nut supplies are limited, so the race is on. It’s in this setting this humorous board-game-disguised-as-a-card-game for 3 to 6 squirrels from 8 years and older takes place. Your furry friend must rush through dangerous woods, where rivals are lurking behind every corner, trying to sabotage your trip to the last stack. Are you ready to outsmart your rivals and guide your squirrel to victory?

The game offers a surprising amount of variety and dynamics and is highly interactive: while you try to form a path of trees , you also try to sabotage the other squirrels and everything is permitted, even the use of chainsaws, bulldozers and flamethrowers! All in all a great game in a relatively small box for game fanatics of every age. The designers of the game are Tom Luyckx and David Ausloos, who also took care of the artwork.

Get Nuts will include rules books in English, French, German and Dutch and will be the first own release since Spiel 2010 for successful, upcoming Dutch publisher White Goblin Games.