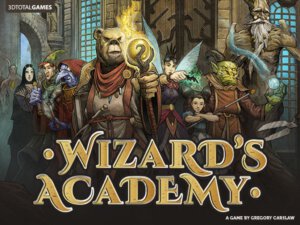 A co-op fantasy game has hit Kickstarter from 3DTotalGames and puts players in the roles of student wizards attempting to save their school. Wizard’s Academy has already hit 50% of its funding goal within the first week of launch. In the game two to six players aim to not only fight off a flurry of monsters but try to keep the doors of the school open as well.

Wizard’s Academy is a cooperative game for 2-6 players in which you play as students trying to save their academy with magic that they do not understand. You may need to animate stone statues to fight off rampaging hordes, persuade an inspector that the academy is safe (and only slightly aflame) or tame a book that has learned to cast its own spells and delights in mayhem.

Each game your capacities are semi-randomised and you must discover which combinations of glyphs will allow you to fight trolls, imps, demons, fires and floods and which ones will cause you to accidentally summon trolls, imps, demons, fires and floods. You may not always have the right tools for the job, but when all you have is the capacity to tear open a rift to the water dimension every problem looks like a fire…

The miniatures feature imps, trolls, demons, golems and the playable wizards. Resin miniatures are available in some pledge levels or as add-ons. These require some assembly, but really capture the details of the characters that populate the academy. A resin version of any mini is a £4 add on (you’ll still receive the original plastic mini so that you can start playing immediately).