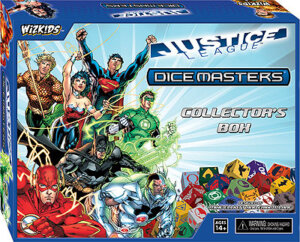 WizKids Games has revealed their plans to bring the Dice Masters system to the DC Universe and their first release will tackle the Justice League. DC Comics Dice Masters: Justice League will arrive in stores next spring with a variety of options to get started, including a team box and collector’s box.

As many comic fans know, the Justice League handles threats too enormous and terrifying for any lone hero. The team is much greater than the sum of its parts, as incredible as they are. This spring, the premier release of DC Comics Dice Masters from WizKids Games will bring the most awesome DC Comics heroes and villains to another gaming platform! Whether you decide to embrace the power and teamwork of the Justice League, or the evil plots of the Legion of Doom, there is a lot of excitement to uncover! 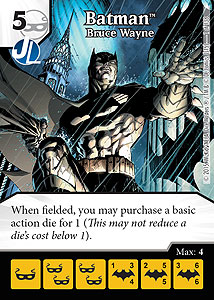 This first release of DC Comics Dice Masters brings the heroes and villains that shape the DC Universe to the forefront of Dice Masters. Fan-favorite heroes of the Justice League such as Superman, Batman, Wonder Woman, Aquaman, Martian Manhunter, Cyborg, The Flash, and Green Lantern show up in multiple versions, each keyed to a different strategy and playstyle. Some are designed to work well with each other, while others function a little more independently. In addition to the Justice League, the Justice Society of America also makes an appearance – Stargirl, Red Tornado, Hawkman, and Green Arrow won’t disappoint new or old Dice Masters fans!

For players interested in the darker side of DC Comics Dice Masters, prepare yourself to plot alongside the Legion of Doom! For the first time ever, a team of villains gets their own unique representation in Dice Masters. They’ll need to work together if they hope to defeat the Justice League! Black Manta, Braniac, and Lex Luthor are just some of the characters ready to cause trouble for the “Big Seven.”

And even though we’ve mentioned the Justice League and the Legion of Doom, there are some characters that a DC Comics premier release wouldn’t be complete without! Of course we’re talking about Batman’s sidekick, Robin! With the dynamic duo present, it’s only to be expected that The Joker and Harley Quinn are also looking to cause some mischief for Dice Masters players.

DC Comics Dice Masters: Justice League will be available via both a two-player starter set and a gravity feed that includes 90 foil packs. As with previous releases, each foil pack will include two dice and their corresponding cards, allowing players to easily enhance their Dice Masters collection, all for the low price of $0.99 per pack!

Players looking for a premium play experience should check out the Playmat, Team Box, and Collector’s Box for DC Comics Dice Masters. These official Dice Masters accessories from WizKids Games will give players an improved play experience, an easier time transporting their teams for events, and a great storage solution – plus some exclusive premium content!

Just after the release of DC Comics Dice Masters: Justice League, players should prepare for five months of exciting, in-store battles with Trinity War Storyline Organized Play! See these heroes and villains in brand-new ways, and in the final month the Grand Prize will feature a villain never before seen in DC Comics Dice Masters!

Last, but certainly not least, DC Comics Dice Masters: Justice League also has some very special super-rare cards. Black Canary, Catwoman, Constantine, and The Flash will be sure to catch your attention. Constantine – Hellblazer is a great foil to any opponent who only has one focus on winning. They’ll be forced to play around him all game. When The Flash is by himself, he can’t be blocked. Catwoman uses your opponent’s strongest dice against them. Black Canary will clear away your opponent’s potential blockers.

With over 130 new cards and 40 new, these super-rares are only the tip of the iceberg. Enjoy epic dice battles with your favorite characters from the DC Universe!