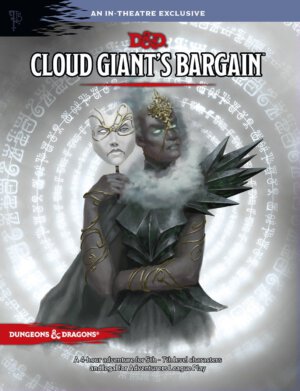 While I’ve made it plain I find roleplaying live streams about as entertaining as watching paint dry, Wizards of the Coast is offering an exclusive giveaway to incent gamers to take part in the upcoming in-theater PAX West Acquisitions Incorporated Dungeons & Dragons event. Attendees of the September 4th showings will receive a copy of the Cloud Giant’s Bargain, a four hour adventure designed for 5th through 7th level characters. I’m guessing this will be a physical copy of the adventure with a PDF becoming available to the masses at a later date.

Before I have to start tackling emails and comments about my lack of enthusiasm for gaming streams, just let me say I’m not knocking programs such as Acquisitions Inc or Critical Role (I do understand they’re plenty popular and I’m not dissuading anyone from enjoying the streams or podcasts) but they just simply aren’t my bag of tricks; I’m old school whereas I enjoy actually playing or running a game as opposed to sitting on my butt watching other people play…

Each year at PAX West in Seattle, thousands of Dungeons & Dragons fans crowd into a music hall to watch people play D&D together. Some wait in line for hours because they know there’s something special about being in the Benaroya Hall when Chris Perkins runs the Acquisitions Incorporated gang through another zany adventure. The players feed on the audience and the atmosphere is electric – now D&D fans across the country will get to experience that electricity up-close-and-personal when D&D is broadcast live to movie theaters nationwide for the first time.

On September 4 at 6 p.m. PT, in partnership with Fathom Events, D&D aficionados across the country will be able to go to their local movie theater and sit with an audience full of fans to watch the premier D&D performance of the year, as hundreds of theaters across the U.S. will be showing “Dungeons & Dragons Live from PAX West.”

In addition to experiencing Acquisitions Incorporated in cinemas, each event attendee will receive an exclusive D&D adventure module. The 32-page booklet contains a four-hour adventure where the heroes work with Acquisitions Inc., and includes tons of Dungeon Master tips to help new players. The best part is that the adventure follows the upcoming D&D storyline and can be used as an introduction to the story of giants wreaking havoc across the land.