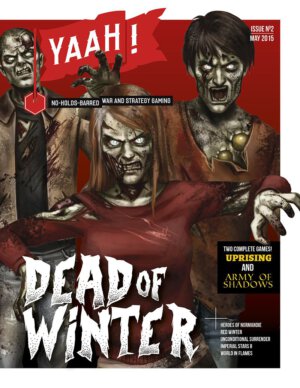 Flying Pigs Games has the newest Issue of Yaah! Magazine hitting and it’s chock full of games and gaming articles this time out.

Yaah! Magazine #2 is shipping. Included in this full-color print magazine are THREE complete games by Brian Train, two with die-cut counters and full color maps, plus a third you play on a chess board. We also have a clutch of scenarios that include Fireteam (by Mark Walker), Heroes of Normandie, Sword and Shield, Dust Tactics, Rivet Wars, and Command and Colors Napoleonics. Articles by Peter Perla, Brad Smith, and Ania B. Ziolkowska, cover a variety of topics including Unconditional Surrender (THE WW2 in Europe game), Command and Colors Napoleonics, Red Winter, Imperial Stars II, Dead of Winter, and more

Brian’s included hex-and-counter games are UPRISING and ARMY OF SHADOWS, two-player endeavors that pit an oppressive state against a desperate but growing rebellion. Each game provides a distinctive, replayable, and non-random take on this common theme that mirrors and complements the other– a dazzling diptych of doubt and insurgency.