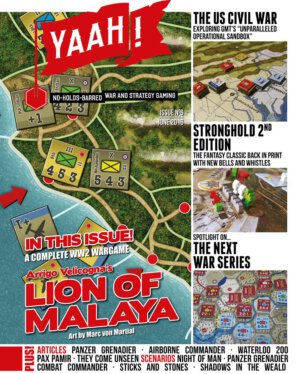 The gang at Flying Pig Games have put together the latest issue of Yaah! magazine and coming your way in May are eighty pages of articles as well as the latest game, Lion of Malaya.

Yaah! Magazine is back with eighty splendiferous full-color pages dedicated to the games you love. With issue number six, editor Tom Russell and his merry band of writers have put together a number of features on an eclectic variety of titles, each illustrated with handsome photographs, and anchored by stylish, one-of-a-kind layout by our esteemed art director Guillaume Ries.
This issue has articles on GMT’s Next War series, Stronghold 2nd ed, Waterloo 200, Airborne Commander, They Come Unseen, and more. Scenarios for Combat Commander, Night of Man, Sticks and Stones, and Shadows in the Weald. Then there’s this issue’s game. Designer Arrigo Velicogna’s Lion of Malaya finds a motley assortment of Indians, Australians, and Brits trying to hold Singapore and Malaya against the Imperial Japanese war machine. Clever fatigue rules simulate the mounting exhaustion and dread. Nuanced air rules, and the assignment of tank and anti-tank assets deftly emphasizes their importance in modern warfare. The Commonwealth is in a desperate situation, but the game’s just as tough for the Japanese, who must win a total victory, or no victory at all. Issue #6 ships in May.
Tags
Flying Pig Games Yaah Magazine